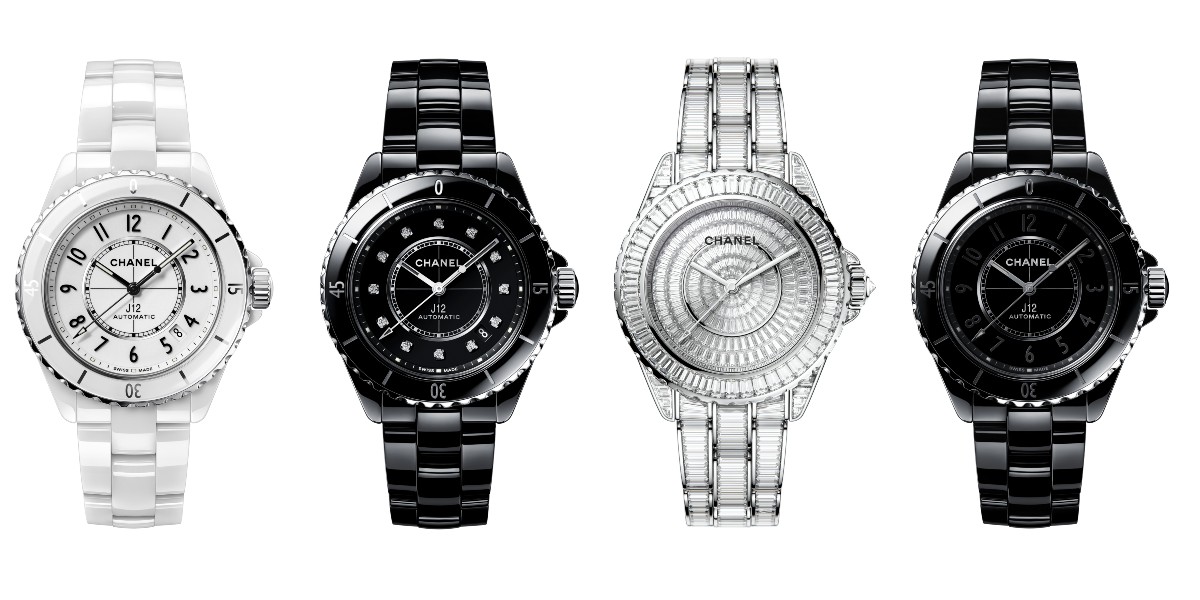 Every year, the global watch and jewellery industry flocks to the city of Basel in Switzerland for the massive trade show, Baselworld, to get a bird’s eye view of all the newest timepieces for the year ahead.

This year, the show kicked off on the 21st March and is set to run on for the week ahead. So far, we’ve set our eyes on a noteworthy piece: the Chanel J12 relaunch.

Chanel first introduced J12, the ceramic women’s dive watch, in 2000. It was designed by the late Jacques Helleu, former artistic director of Chanel. The watch Helleu had in mind was to be “timeless, sporty, and all black,” the brand notes in a release.

Helleu drew inspiration from the things he loved, namely automobiles and sailing. In the end, he came up with a Swiss-made, 38-mm round-face, automatic watch named “J12” — also the name of the 12-meter-long J-Class racing boats used in the global sailing match, America’s Cup.

When French designer Arnaud Chastaingt joined Chanel as artistic director in 2013, he took the J12 and breathed new life into it. Notably, in 2016, he made the J12 into rings, leather cuffs, and couture gloves.

Let’s go through the aesthetic changes:

The changes to the exterior are minor as can be — while there were previously 30 notches (the teeth that you see) around the bezel, there are now 40. That gives a cleaner and more even look.

Now, when you rotate the bezel, it sounds lighter and more musical instead of the previous “clack, clack, clack” noise — Chanel actually worked on this.

The watch’s crown (the little knob to wind the watch) is now smaller by a third of its original size. That, too, means that the ceramic cabochon that sits in the middle of the crown is now smaller.

If you were to take a look at the watch’s railway (the inner ring that surrounds the word ‘Chanel’), there are now bolded indicators to demarcate every fifth second.

The biggest of the exterior changes must be the typeface. The words, ‘Chanel’, ‘Automatic’ and ‘Swiss Made’ now share the same font — a custom font designed by the Chanel Creation Studio. Previously, the words weren’t in Chanel’s house fonts.

On a whole, all these minor changes adds up to a polished look for the J12. While it formerly looked sporty, chunky and young, the J12 now looks lighter, refined and more mature.

Yet, surely that’s not all to this major 20th anniversary relaunch for the J12, is it?

No, there’s one bigger change: Chastaingt switched up the entire movement (or timekeeping mechanism) of the watch. “Finally, I decided to change everything without changing anything,” the artistic director, Chastaingt, told WWD in an interview. And he sure did.

Previously, the watch’s back was made in full steel — which meant that the wearers couldn’t see the internal architecture inside, and the steel back was prone to scratches. But that was fine, because the movement wasn’t exactly beautiful enough to be showcased.

Conventionally, fashion companies which sold watches bought their mechanisms from generic Swiss watch manufacturers. This time round, Chanel engaged a three-year-old manufacturer called Suisse Kenissi, to exclusively develop a beautiful movement to be displayed via a sapphire crystal open-back for the J12.

Here’s what’s cool about the new movement, called Calibre 12.1, but follow us closely here: The bottom half-moon metal wedge that’s inscribed with the words ‘Calibre 12.1’, ‘Chanel’, and ‘Swiss Made’ is called the rotor. It’s traditionally a full plate without the gaping hole that sits above ‘Chanel’ — because that plate has to be of a certain weight and heavy.

And because Chanel wanted to carve out a hole to showcase the inner workings of the watch, they had to find ways to retain that weight in this rotor plate. In the end, they chose a heavier metal, tungsten, to ensure that the rotor works perfectly.

Essentially, Chanel placed a pretty good movement in their mass-marketed J12 watch. And this marks a landmark move for Chanel, for they seem to be affirming themselves as serious players in this mechanical department.

Yet, what’s in it for the wearers? You could say that the new Calibre 12.1 is indeed a better timekeeping mechanism that is probably more precise than J12’s previous movement. However, in an age where Apple’s Siri, Google Home, or Amazon’s Alexa could read time out to you, a watch is honestly not a necessity. It tells you time, but it tells everyone else who you are as a person.

Lydia Yap, The Young Singaporean Jeweller To Watch Out For

The Instinctive Orator: Joanne Peh On Leaning Into The Discomfort & Growing As An Actress