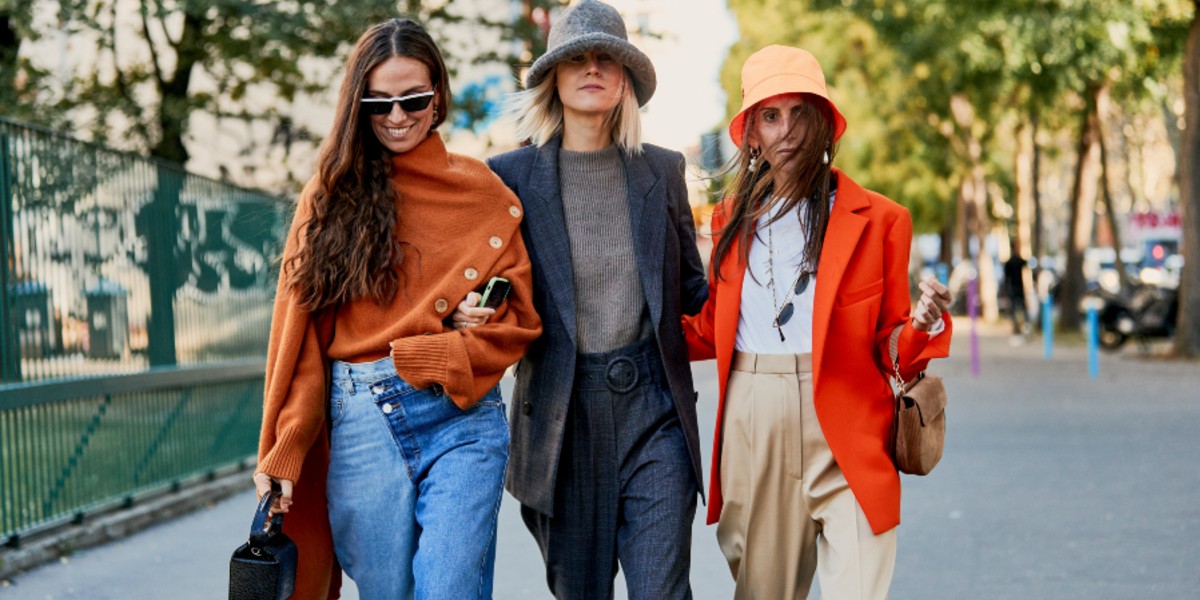 As a write this, to one side I see ELLE.com’s style director, Nikki Ogunnaike, wearing a cardigan buttoned all the way up, conservatively tucked into khakis. She’s a staunch “no belly buttons at the office” kind of dresser. In front of me, writer Chloe Hall is wearing Cool Person sweat pants and sneakers. I share the elevator with employees in suits—but I cross my arms to hide the fact that I’m not wearing a bra. Since the ’80s and the rise of Silicon Valley’s laid-back company culture, office dress codes are increasingly more lax- and therefore more confusing. Which prompts us to ask: what the hell does business casual even mean anymore?

First, I asked my mom. Evangeline Carreon, 60, has worked at the same title insurance office for over twenty years, and personally saw the shift in style. “In the ’80s to ’90s, we had to wear formal pants and a top, but no tank tops. Guys would wear a shirt with necktie,” she said. “Some girl now wears jeans with a shirt and running shoes; I wear that on Casual Fridays only. To me that is not casual attire, that’s on-the-go attire,” she said in a disapproving mom tone. But not everyone agrees. “There’s no dress code in my office,” stated Devon Kelley, 26, who works at a tech company. “During my orientation somebody asked the HR Director if they could show up in a bikini and he said ‘technically, yes.’ I rarely choose bikinis for the office, but I tend to tread the line.”

So what are you thoughts? Weigh in on what “business casual” actually means and we’ll tally up your votes to see whether you think mini skirts are suitable, suits are OK, and whether hoodies and T-shirts should stay or go. In the mean time, read on for tips on how to incorporate seemingly tricky items into your 9- 5 style.

Between 2017 and 2018, sneaker sales went up 10 percent to €3.5 billion, globally. This uptick is directly effecting what we wear to work. Plimsolls, tennis shoes, and even dad shoes are regulars at the ELLE.com offices. Are they at yours?

Our tip: If you’re nervous about wearing casual sneakers, try a pair of fresh white plimsolls. They’re just as polished as a pair of loafers.

You’ll still see a sea of grey on Wall Street, but most offices don’t require a suit. In other words, you can be a working girl without having to pull inspiration from Working Girl.

Our tip: If dark suits are too formal at your job, try a colourful set. They’re all over the runways, plus super affordable options from ASOS and Topshop are also available. Dress down your suit with the aforementioned sneakers, or comfy flats.

Mini skirts are a little more uncommon at the office, because someone has arbitrarily decided that bare knees apparently get people going. Thoughts?

Our tip: If you’re scared of disrupting a stuffy office in a short skirt, try traditional suit fabrics like wool or crepe, then style them with sheer tights and oxfords.

According to Mel Maxwell, 33, who works in the publishing field, jeans always work. “Denim, leather, skinny, boyfriend, stretchy, distressed—it’s all acceptable, especially when paired with a blazer,” she recommended. “Honestly, slacks seem somehow seem lessbusiness appropriate in these current times. They make me think of […] the uniform a high school mathlete wears in a fly-over state.”

Our tip: Most denim styles are fine for the office, but dark washes that have little to no distressingare a little more elevated. A white button-down shirt or chic sweater lends a more formal touch.

So what could be inappropriate?

“The only thing that is considered inappropriate [at my office] is too much skin: I think showing too much boob or leg in a business setting is the last taboo,” says Maxwell. “I blame the patriarchy.” At the end of the day, read the room and ask your boss. Denim, sneakers, mini skirts, et. al. don’t truly effect your output, but a badass suit will make you feel like a badass. That’s just science.

This story first appeared on ELLE.

Topshop Is Launching Its First Vegan Shoe Collection In The UK

Why One-Piece Suits And Onesies Are The Ultimate Fashion Hack

24 Sustainable Clothing Brands That Are Anything But Boring