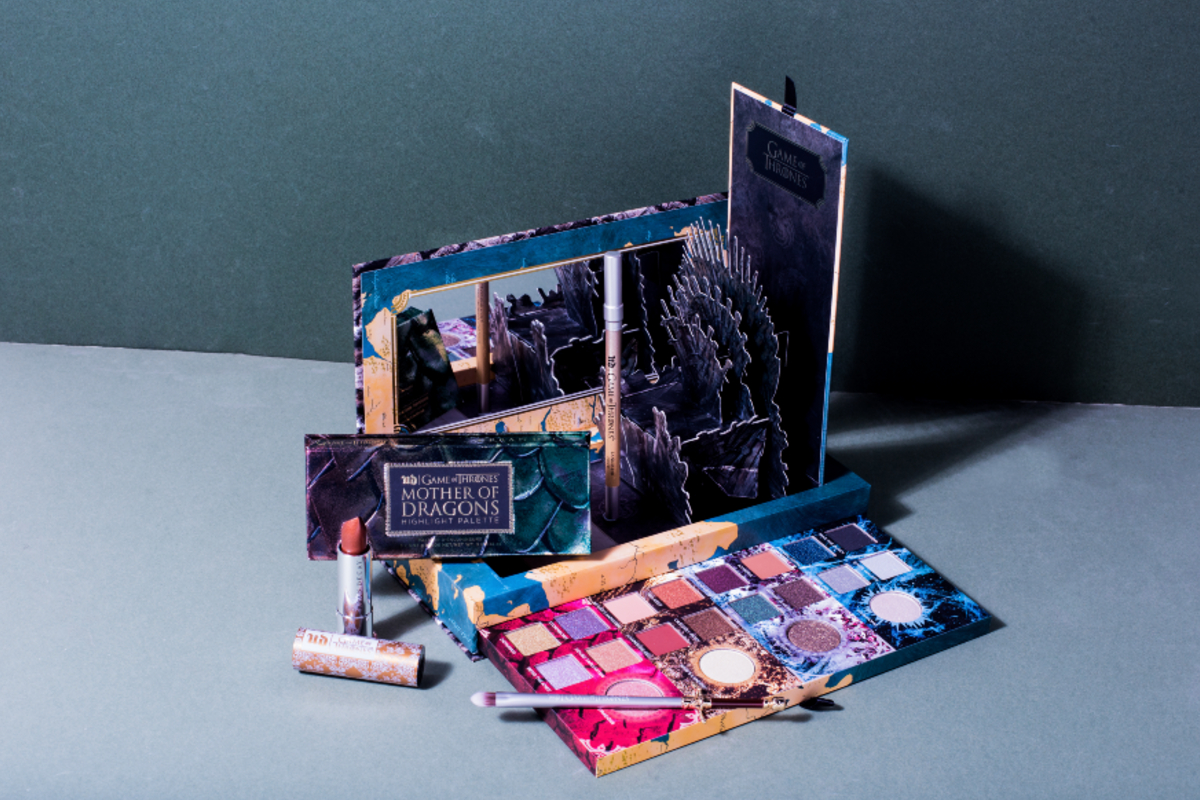 Coinciding with the release of the eighth and final season of television spectacle Game of Thrones (GoT), there have been various limited edition product launches to tie in with the series’ end. Some have had a very tenuous link, some have been kind of cheekily delightful (Johnnie Walker’s White Walker Blended Scotch Whisky), but none have excited the beauty lover in us as much as Urban Decay’s makeup collection.

Do house politics and epic battles with undead warriors translate into must-wear colours and beautiful textures? That’s what we wanted to know to know as well. We were lucky enough to receive a selection of makeup products from the brand to try and on our first thoughts were… “Ooh the packaging!”. We may not (yet) know who will sit on the Iron Throne come the end of the series, but here’s our verdict on the makeup.

If you want to purchase them online, they are available till 11:59pm on 29 April as a special flash sale on Sephora. But do note that many of the more popular pieces are already sold out. If you were unsuccessful at getting what you’ve been eyeing, you’ll have to wait for the in-store launch on 9 May.

What it is: A blockbuster eyeshadow palette that features a pop-up Iron Throne and 20 eyeshadow shades that have metallic, shimmer, matte and transformer shades.

What it refers to: What doesn’t it refer to? The palette is divided into colours that represent the three remaining houses: Stark, Lannister and Targaryen, as well as shades that reference the zombie army of White Walkers. Names and references you might recognise include “Bend The Knee” (a royal lilac with a blue shift), The Red Keep (a sparkly copper) and Free Folk (a shimmery silver).

We say: This is probably the most bang for your buck when it comes to all of the GoT x Urban Decay stash, thanks to the 3D throne that pops up, and the wide variety of eyeshadow colours. The colours in the palette range pay homage to the different houses, so you’ll get jewel-tone shimmers for House Targaryen, “regal” metallics and mattes and in shades like burgundy, reddish bronze and gold for House Lannister and smoky, earthy shades like iridescent forest green, and sparkly brown for House Stark. As for the Whitewalkers, expect cool, icy shimmers in shades of blue, silver and light mauve.

These are not super easy shades to wear if you’re not a makeup connoisseur, but that’s the fun part. While you can mix and match the shades as you please, we found sticking to each house easier for those who are not deft at colour matching. For example, the reddish tones from House Lannister will make a cool, smoky, red eye when worn together.

The Transformer Shades (you can recognise them as they’re the only ones in round pans) are a cool addition, as these shifters literally mean you can increase the number of shades by four fold, depending on how you mix and blend them. The real conundrum is whether to actually use any of the makeup in this palette, which will add a more adventurous slant to your usual makeup routine, or keep them in pristine condition as an untouched collectible.

What it is: A cruelty-free eyeshadow brush that can be used for both all-over colour and more precise application.

What it refers to: The sword owned by series heroine Arya Stark that was given to her by her brother/cousin? Jon Snow. So named for its thinness that is suited to her slight build.

We say: We loved this brush for so many reasons. First, it is a very clever take on interpreting a well-loved weapon into a makeup tool. Secondly, this is well made, like we imagine the real Needle to be. It’s a pretty accurate replica and more weighty than we expected. Bonus points for the actual bristles of the flat brush that picks up eyeshadow well, but is able to blend it seamlessly. You can use it for a sweep of colour, to line the eyes, or for more specific placement as well, so it’s quite versatile.

What it is: A trio of Afterglow highlighters that are made of the brand’s signature lightweight, finely-milled formula.

What it refers to: Each shade is named after one of Daenerys Targaryen’s (aka the Mother of Dragons) three dragons. Drogon is a frosted pink, Viserion (RIP) in a metallic golden nude, and Rhaegal is a metallic bronze.

We say: The packaging, like everything in this collection is well-conceived. The outer box looks like the iridescent scales of a dragon, and when you open the palette, each block of colour is embossed with the dragon eggs given to Daenerys by Lord Friendzone (oops, we mean Jorah Mormont).

The colours in this highlighter palette are beautfiul, but were a tad difficult to carry off on our tanned skin. The shade Drogon is so frosty it was giving us serious ’80s throwbacks when we tried to use it as a blush, and while the other two shades are also pretty, they have to be used sparingly on account of the extreme sparkle. Designed to be blended together or used separately, we say it’s perfect for the evening, but not something we would necessarily rock in the day.

What it refers to: Both are colours from House Lannister whose motto is, “A Lannister always pays his debts.” Historically one of the richest houses in the Seven Kingdoms, the family is known for paying off both enemies and stooges in bags of gold. Cersei Lannister is the ruthlessly competent (and terrifying) matriarch of the family, who along with her two brothers are among the only surviving Lannisters.

We say: For the eyeliner pencil, we loved the creamy, glide-on formula and the longevity of it. Colour-wise, gold is not really an everyday shade, but the muted, almost pale platinum tone is pretty cool. The eyeliner is one of the least elaborate package-wise though, so there’s not much beside the outer box and the subtle ombré pencil to indicate this is GoT-related.

We really loved the lipstick which is housed in a floral patterned case with the (house) symbol of the golden lion on it. The lipstick had a great texture and lustrous sheen. When swatched on our skin it looked more like warm peachy bronze, but on our lips it looked much darker and richer. This is quite long-lasting — when the shine wears off it leaves a deep bronzy nude stain. (Sidenote: I told my husband I was wearing a lipstick called Cersei Lannister, and his wry response? “Shame!”) We would wear this for the night though as it’s a bit too shimmery for the day.

Is Becca’s Zero No-Pigment Virtual Foundation The Game-Changing Makeup In An Era Of Mask-Wearing?