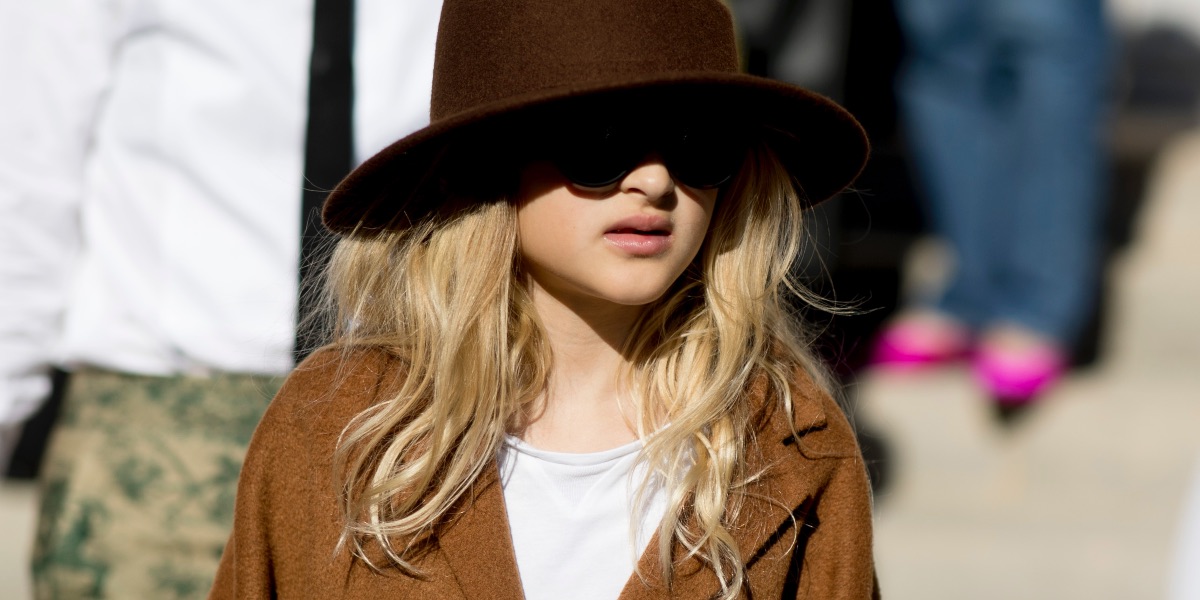 Burberry To Release A Monogram Collection For Everyone, Fronted By Gigi Hadid

The other night, my 3-year-old shouted, “Alexa, off!” in his sleep. It was so loud that he woke both me and my husband up (my son was in our bed; he’s always in our bed). We all had a laugh about it in the morning—he didn’t remember, but chuckled along in that way 3-year-olds do when they know they did something funny, but don’t quite understand what. Then he asked Alexa to play songs by his favourite artist, Carly Rae Jackson (emphasis his), and he and his 16-month-old brother had a ‘Call Me Maybe’ dance party in the living room. Afterwards, he shouted, “Alexa, what’s the weather today in New York City?” and she told him that it was going to be chilly with showers. So when our nanny arrived he informed her that they couldn’t go to the park after school, because Alexa said it was going to rain.

I realise, upon retelling these cheerful family anecdotes, that it all sounds slightly dystopian. My 3-year-old’s best friend is a computer? (That’s an exaggeration—his best friend is a morbid boy named Charlie who recently told him that butterflies who couldn’t fly were “probably dead,” prompting him to ask—me, not Alexa—“what’s dead?”) And it’s not just that: A computer that’s mining his 3-year-old thoughts and dreams and penchant for Canadian pop for potential profit?

Modern parents are constantly navigating how to incorporate technology into our kids’ lives, without any guidance other than our intuition combined with dire, vague warnings from W.H.O about limiting screen time. I mean,  duh, W.H.O. We’ve all seen the screen time-zombie face of a toddler who somehow managed to snag mommy’s phone and open up a creepy unboxing channel on YouTube. And while I know that W.H.O. would like me to watch Daniel Tiger with my 3-year-old and then discuss the episode afterwards, well, W.H.O—have you ever watched Daniel Tiger? Tell me, W.H.O, have you suffered through that insipid baby Tiger’s adventures with his inexplicably pants-less dad? If you had, I think you’d be singing a different tune—and no, I don’t mean “If you have to go potty, stop and go right away!” (Okay, okay, it is an adorable show with a lovely, inclusive message. It’s just that I, an adult human, find it annoying. Apologies to Mr. Rogers.)

There are tons of trendy books out about this topic, mostly about just doing your best or even embracing it all. Everyone’s worried—the 2018 American Family Survey revealed that parents are more concerned about technology than drugs, alcohol, and sex—but no one actually knows what they’re talking about.

“I do sometimes worry that Alexa answers his commands without asking for a please or thank you.”

Especially when it comes to something as confusing as Alexa. Alexa’s not a screen!She’s just a disembodied voice who lives in a cylinder in our living room and answers our child’s endless questions on command. Don’t know the hottest planet in the solar system? Ask Alexa. (It’s Venus, which also doesn’t have any atmosphere. Thanks, Alexa.) How do you say thunder in Spanish? (“Trueno.” Still just as scary as when it happens in English, unfortunately.) Our son asks Alexa nonsensical math problems like, “What’s a hundred and a million twelve minus twenty?” (Alexa’s sorry, but she can’t answer that.) He also asks her to play “daddy’s favourite, ‘September’ by Earth, Wind, & Fire,” because apparently my husband has the musical taste of a 90s wedding D.J. Our baby knows that when this song comes on it means we all dance around in a circle and go, “1, 2, 3!” and lift them both off the ground at the same time.

I guess my possibly-non-controversial, roundabout point is: Alexa is the best thing ever? Even though she’s listening to us and recording everything we say and making sure that nearly all of our disposable income is spent on Amazon. But maybe who cares? We went away for a week recently and I actually missed Alexa. My son kept saying, “Alexa…” before realising that no one was going to answer him. It was sad. There weren’t any dance parties. No one could remember how many moons Jupiter had. We’ve had this stupid computer for less than a year and somehow it’s become more emotionally important to me than my two cats, who I forgot existed until we came back and opened the door. I’m sure that was Amazon’s plan all along.

My son now plays a game where he wants me to pretend he’s Alexa and ask him questions. So I say, “Alexa, what’s the weather today in New York City?” And he’ll smile and go, “Um, um, currently it’s 14 degrees and sunny. Today’s high is 22 degrees.” He says he knows that Alexa isn’t a real person, but he does call her “she” and clearly, he even dreams about her. I do sometimes worry that Alexa answers his commands without asking for a please or thank you, but he seems to understand that you don’t talk to humans the way you talk to Alexa. Not that he’s rude to her. If anything, he gets frustrated when she doesn’t understand him, and has weepily told on her to me, saying, “she can’t do it!”

Yes, the privacy thing..is a thing. Last week, a complaint was filed with the FTC about Amazon’s possible (er, definite) violation of child privacy laws in relation to its Echo Dot Kids Edition, which was “remembering” information that it claimed it was deleting. Does Amazon already have files on my two babies, storing up info and preferences and early speech patterns in order to target them later with a perfectly curated algorithm? Will my sons understand that they only like Justin Bieber because his songs were served up to them in just the right moment, in just the right way? If I had to guess: Yes to the algorithm, that is our dark future; who knows about Justin Bieber. My husband and I were discussing these sticky issues and he started waxing poetic about visiting libraries as a kid in order to discover new music (he’s 40 going on 85). On the other hand, my entire musical taste is based on the CDs my older brother bought and played, over and over, on our one CD player. So do I really like Wu-Tang Clan? I think so!

I’ve come to accept Alexa as part of the family. My baby calls her “Ah,” she’s teaching my 3-year-old Spanish, and she’s filling our house with the “effortless groove,” as my husband dorkily puts it, of Earth, Wind, & Fire. She’s less smelly than the cats and less grating than Daniel Tiger. She knows what cars are made of and what the weather is in London and that when a certain 3-year-old says “Jackson,” he really means “Jepson.” I’m sure I’ll change my mind once W.H.O. releases a report saying she’s frying my children’s brains. For now, though—Alexa, on.