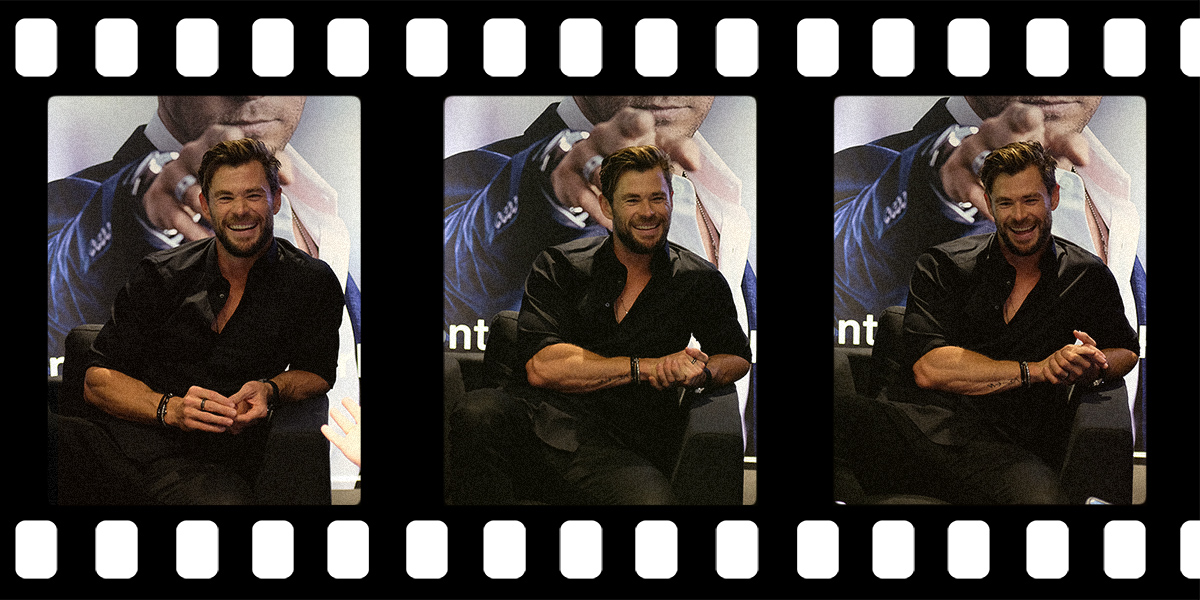 Singapore got a lot hotter last night — and it wasn’t due to the haze. The God of Thunder dropped by Gardens by the Bay with TAG Heuer to kickstart the Formula 1 Singapore Grand Prix weekend. Donning a Carrera Heuer 02 GMT Chronograph and an all black ensemble, Chris Hemsworth sat down to chat about playing Thor, his concept of time and fighting dinosaurs. Read all about it in the interview below.

What watch are you wearing today?

Carrera, I love this watch. It’s probably one of my favourite watches. It suits me very well. The faces are beautiful. I love the strap too, very sporting. I wear it surfing and working out, and so on. It fits all occasions for (laughs) quite a busy life.

Probably the working out. Because I had to sit at that weight or that size, I gotta work. I spend a lot of time at the gym and I have a very strict diet, ate huge amounts of the right foods and protein, and so on. I mean I love it; it’s been a great education on my body and how to manipulate my shape, health and fitness in general, but it’s a lot of work. It’s not much I dislike about- or anything I really dislike about playing the character. It’s been the biggest joy of my career and a huge part of my life. It’s wonderful.

For me, the change of the different times, you know. There’s an age where you do a lot of comedy at one point and I love comedy. I feel I’ve been able to do a lot of that, sort of feed that urge. I recently did a movie for Netflix [directed by] Sam Hargrave, and it was the most amount of action I’ve ever done on a film. The most physical film I’ve ever been a part of and that felt like it was an athletic experience that I’d journeyed on.

Would you consider returning back to television?

Maybe, depends. I mean television is so different now to when I’ve been on TV 15 years ago, and I did soap operas — that was a lot of fun, and it gave me my kick start in my career. But I don’t know, I’m more so loving just doing movies and get in and out [in] 3 months or 4 months, and changing up to do something different. To do a long term TV experience would scare me because my attention span wouldn’t be able to take it (laughs).

Speaking of time, what is your concept of time?

I don’t know, my concept of time? It feels like things are speeding up constantly, I don’t know if it’s just the world we live in or the fact that I have 3 kids or, you know, busy in my career and so many things going on. I love to slow it all down a bit, but I think that’s kind of being in charge of your own- or being a little more precious with your time. And sort of saying ‘no’ more often and just being still, sitting, and really soaking up the experience. Not getting caught up in the past, or future.

Tell us the last time you felt like time stopped for you.

I mean I have some pretty special moments with my kids: doing something, picking [them] up from school, dinner, soccer practice, go home, pyjamas, read a story, and just when I went to get out, my daughter was like “Hey dad,” and just started asking me the most time stopping sort of questions. And I just had one of those moments — parental moments of “wow I have a daughter” (laughs). There was some sort of depth to what she was saying, in such a beautiful child-like fashion. It’s like they have the ability to grab you and plant you in this moment, and everything else sort of ceases to exist for moment.

Do you remember what she asked?

Yeah, a lot of things. She was asking a lot of mature questions about life—what we’re doing here and what happened to her friend’s dog that died. You know, those sort of questions that as adults, we still can’t answer. Existential.

If you can time travel, where would you like to go?

Probably to the dinosaurs. Wrangle a T-Rex. A Velociraptor.