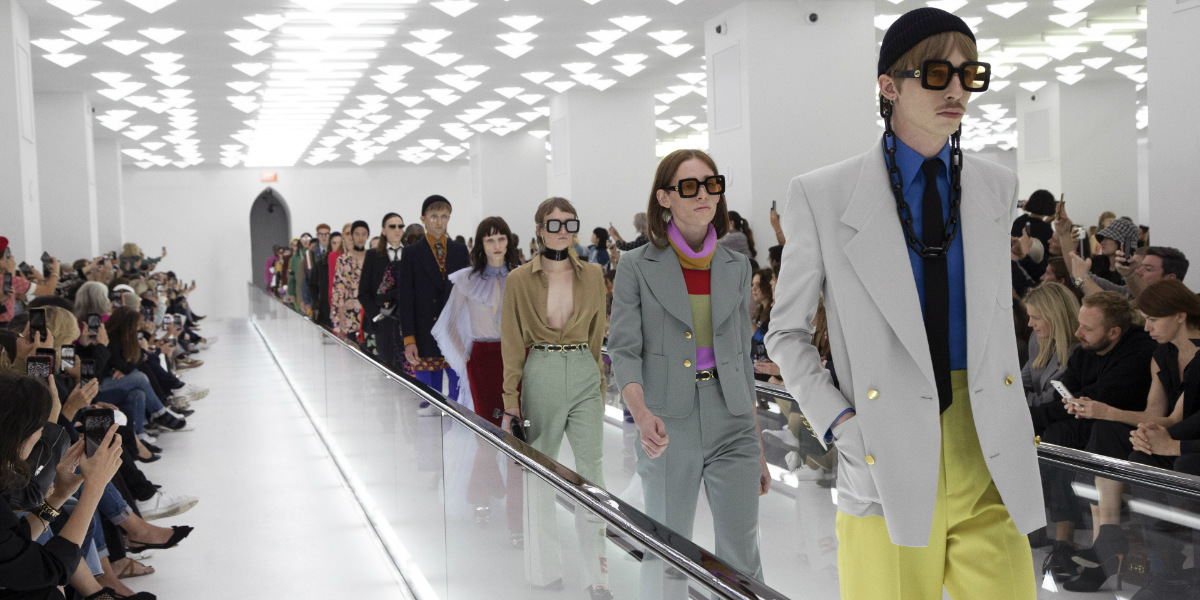 If you just watched the Gucci SS20 runway show and mistook the surroundings for Heathrow Terminal 3, you wouldn’t be the only one.

On Sunday, the luxury brand’s creative director Alessandro Michele sent a legion of models down mint green-lit travellators, inside a clinically-white setting – a sharp contrast to the reflective mirror setting of his autumn/winter 2019 show earlier this year.

At the show’s opening, red lights gave way to white halogens, illuminating several rows of moving walkways, much the same as those that connect airport gates. The first wave of models appeared, stationary but propelled forward by the conveyor belts, dressed in the same white-beige shade, appearing like a production line, accompanied by the crunching sound of metal shutters lifting.

The collection – inspired by the idea of subjectification – first showcased 60 utilitarian beige and ivory looks, designed to ‘represent how through fashion, power is exercised over life to eliminate self-expression’.

In the show notes, Michele spoke of the ‘microphysics of powers’ that control, confine and regulate society and the need to champion ‘new forms of subjectification able to disengaged the pressure of social normativity’.

According to Sara McAlpine, ELLE UK‘s fashion features editor: ‘The show was titled Orgasmique, which is interesting given Gucci’s history as a “sexy” brand. After all, sex sells and Gucci is selling.

‘What’s even more intriguing – and very Michele – is the brand’s reverse-engineering of “sexy”, bearing in mind that his casting is often interestingly “atypical”.’

Breaking up the initially all-white collection, the sound of lightbulbs blowing soon echoed through the catwalk space before the Crash Land (Bijoux Remix) by Dancing Astronaut played overhead, as did Madonna’s hit single ‘Justify My Love’, and with it welcoming Gucci design favourites including chainmail dresses, 1970s-inspired tuxedos and riding crops.

Classic Gucci symbolism also reigned supreme throughout, with the brand’s famous horsebit and interlocking Gs seen as decoration on several pieces including on bags, belt fastenings, and also a comical backpack comprised of a full-size pillow.

Other standout items included trainers featuring a dial to tighten the laces, chain loops instead of chains and intensely coloured bomber jackets.

Wallpaper reports that 70% of the catwalk set’s materials were recycled or reused, the lighting was LED and the show invitations were produced using sustainable Forest Stewardship Council FSC paper.

In 2017, Gucci unveiled its 10-year sustainability plan centred around three areas: the environment, people and innovation. For the former, the brand aims to guarantee the traceability of 95% of raw materials.