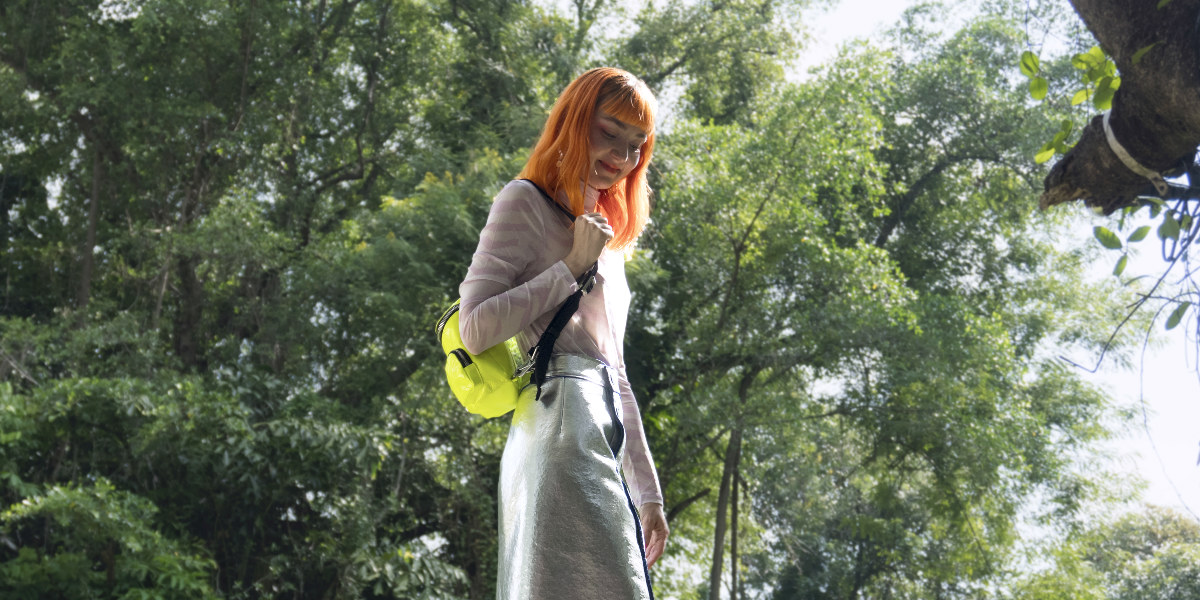 What does it mean to be human?

In a series of campaign videos for BIMBA Y LOLA’s FW19 collection, digital artist Ines Alpha attempts to answer this age-old question, making use of 3D makeup and digital effects to illustrate her imagination of the future.

Shot in the northwest Spanish island of Vigo, the barren landscape invokes a feeling of otherworldliness. With the addition of Alpha’s futuristic sci-fi digital filters, the videos depict her vision of the future where digital beings and humans coexist in harmony.

A total of six campaign videos were shot, each one featuring model and artist Soraya and BIMBA Y LOLA’s FW19 collection of bags. Iridescent splotches of liquid float and wrap around her and the landscape. In some videos, a small spherical pet with crescent moon eyes can be seen interacting with Soraya.

Alpha dropped by our sunny island on 16 October to celebrate the launch of BIMBA Y LOLA’s Singapore online store. In an exclusive interview with ELLE Singapore, she discusses the rise of 3D filters and the true essence of the campaign.

Can you explain what is 3D makeup and what is it that you do?

I use 3D software and new technology to add 3D elements to people’s faces. Simply put, I do makeup in three dimensions.

What is the beauty of 3D makeup?

People are drawn to using filters to express their personality. When you think of the word ‘filter’, you associate it with something that is put between two things to remove the impurity so it acts as a barrier. But for me, I think that filters remove that barrier. It helps connect people with each other because it allows them to express themselves to the world even if they are shy and introverted. When you finish playing, you can just remove it and try another one. There’s literally no risk in just trying the filter.

Tell us more about the collaboration with BIMBA Y LOLA.

BIMBA Y LOLA approached me with this idea after watching one of the videos I did with Panteros666. In the video, I created a little digital pet with a cute butt. I think butts are very important in character design because they’re so cute (laughs)!

BIMBA Y LOLA told me that the character was really cute and asked if we could do something with it in their upcoming campaign titled #thisisHUMAN. It was about humanity and the future of gender. So I decided to make a little sister of this character and play with the concept of humanity.

The premise is this: In the future, humans live in this digital world.This pet will help us in this new world where everything is digitised and the new human will wear 3D makeup. They see digital elements all around but the pet is there to say “don’t panic, don’t worry it’s fine — you will enjoy it”.

I mean, what’s a pet for? To give you reassurance and security in the midst of chaos, to soothe you and to love you and to take care of you.

What does the theme #thisisHUMAN mean to you?

I wanted to explore the idea of what it meant to be human. So I looked for the definition on the internet and it was about being kind to one another, being helpful and showing love.

I thought that it would be a good idea to activate the 3D makeup with love. There’s one video where the makeup appears on the model’s face after the digital pet kisses her. I think that love is really important and people tend to forget that we need to be kind to each other, love each other and take care of each other.

Even though my video isn’t about that, I wanted to bring love and cuteness to everything I do. I wanted people to feed themselves with love as they watch my videos.

ELLE Club: Inside the Launch Party

Here Are The 4 Key Trends of Emporio Armani FW19

A Walkthrough of Prada’s Thunder Pop-up

Prada’s Iconic Nylon Bags Are Getting a Sustainable Makeover