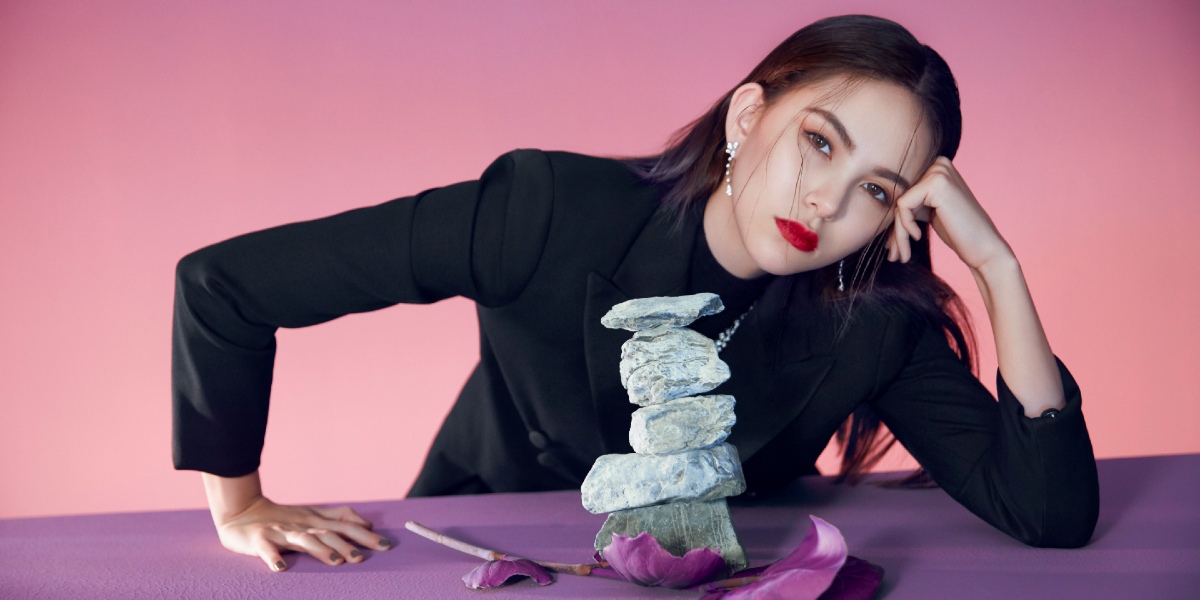 Ferragamo Has the Low-down on Nailing Hollywood Glamour

When Hannah Quinlivan converses in Mandarin, there is an unbridled spontaneity to her disposition. Giggles cleave her sentences, a wrinkle of the nose punctuates, and a cheeky pout tells you to take her quip in jest. Her lively Aussie lilt by comparison, seems to keep these idiosyncrasies under wraps.

It’s a natural fragmentation that psychologists have observed amongst multi-lingual individuals, and such code-switching is in the blood for Quinlivan. The 26-year-old actress grew up in Taiwan, is Chinese-Korean on her maternal side, while her paternal lineage is Australian. “I was quite different from the other kids around me at that time, but it was actually a special experience,” she says. “There’s the good and the bad; it’s good to be different, yet I do feel like you don’t know where you belong because you’re half Asian and half white. But everyone treated me nicely.”

Her multi-cultural heritage has also christened her with three names — the Chinese audience refers to Quinlivan as Kun Ling; she also goes by Jen Wu — and a leg up when it came to her Hollywood crossover last year, after easing into the spotlight with variety shows and supporting roles in local TV dramas back home. She’s the trigger-happy assassin Xia in action flick Skyscraper, an antagonist to its lead Dwayne Johnson who plays the U.S. Marine-turned- security-consultant Will Sawyer, and speaks of the comfort of being able to embody the role without any language barriers.

Perhaps more formidable than Quinlivan’s icy rendition of Xia is that she auditioned for the part just three days after the C-section delivery of her second child, and began training for the physically demanding role a month later. “I think when you’re given chances, you have to try your best with it,” she says. “Having just had a C-section didn’t really cross my mind.” She was also a steely badass (getting caught up in car chases and serving roundhouse kicks) in another action movie prior — 2017’s S.M.A.R.T. Chase that starred Orlando Bloom as an antique heister.

There is a pattern she has established with but just two big screen endeavours: as the skillful bruiser you pray to never have to cross, and a marked departure from the drama gigs. “My idol used to be Maggie Q. She’s so hot and feisty and that’s just so attractive,” Quinlivan says. As a child, becoming an actress was the dream: “I was intrigued by her, and I felt like being someone that could fight.” It was either that, or a vet. She also considered the jet-set career of a flight attendant. And it’s obvious which intent has been willed into reality.

The desire to emulate one’s hero of course, is rarely the sole fuel for passion. A personal and intimate bond with the craft is customary — if not necessary — and the way Quinlivan describes an actor’s resume calls to mind the life-long relationships with one’s innermost circle of friends. “You experience all these different characters from what they do, what their job is, and what their life is like. You experience it in your heart, and you learn from them.”

Those who have yet to witness her acting chops will probably think of her as, first and foremost, the wife to Mando pop king Jay Chou. Of their coupling, the tabloids have painted a whisked-off-the-feet fantasy: a first brush at age 14, romance at 17, and the exchanging of vows in the medieval Selbey Abbey church in North Yorkshire after Quinlivan turned 21. At lede-level, it’s like a rom-com his most hardcore fans would have probably played out in reverie.

To say that there’s a flipside to fame almost feels superfluous to bring up. The Internet chronicles the lives of the rich and famous, and in doing so, have made sure many a celebrity that grew up under the gaze of the world now have very Googleable track records, which double up as cautionary tales. Quinlivan wasn’t that child star attempting to shed a wholesome Disney effigy for normalcy, but her prominence skyrocketed overnight by association to Chou when the couple took their relationship public in 2014. She was still in the early days of minting her name, by way of self-merit, and as an actress.

Did she feel like she had to work doubly hard to step out of Chou’s shadow?

“It is hard to have your own name, but I look at it as having to be responsible for [his]. Everyone thinks your life is perfect, but it’s on you to tell people your life is the same, and to behave positively,” she says. “He’s really supportive. [Jay] is such a busy guy, but he’s always there for us — the kids and I.”

The couple has a good cop, bad cop situation with their children, and Quinlivan is quite the unyielding figure just like the film personas she’s taken on thus far. “I set the rules. When I’m too strict, he’s their way out. We make quite a good team at home.” Growing up as the only child for a decade, on her dad’s side — her only sibling then was an elder half-sister from her mother — it’s a role that has taught her what it means to be responsible, and to prioritise others above herself.

Take for instance her bid to keep her children out of the spotlight. Her profile on social media reveals their candid moments, but never their faces. “When I take my mum and kids to the park, I’ll stand further away because I don’t want people to recognise me and take pictures,” she says. “I like to see them play, but I don’t want them to deal with that part [of fame].”

A typical day when work doesn’t beckon then revolves around the young ones: eating breakfast with her oldest, Hathaway, before she’s sent off to school; arts and crafts with her youngest, Romeo; going to the park and then sending them both for classes. “Swimming, soccer, gymnastics, basketball… Oh, all that. They have classes Monday to Sunday.”

Of course, Hathaway and Romeo aren’t the only multi-taskers in the family. Quinlivan also runs a clothing label, Jendes, that she launched last year just a week after Skyscraper hit the box office, and wears a trio of hats — designer, digital marketeer and campaign model — with this baby.

“I’ve always liked clothes, and mixing and matching [to create] an outfit.” (A full look off the runway or out of a campaign is not her thing.) Her girlish, easy-to-wear pieces allow exactly that, just intentionally pared-back enough to be imbued with fresh stylistic perspective as she intends for them to be worn again and again, with the occasional piece that cheekily nods at her passion for animal rights. “I’ll have a rabbit on it, along with [the words], ‘I need them more than you do [fur]’. It’s a humourous way of telling people that we should care about this issue.” She continues, “[Humans] are lucky to have the ability to speak, so I really do feel responsible to speak out for animals.”

It’s easy to forget that Quinlivan is still only 26, and to perceive her by the yardstick that is Chou who, at 40-years- old, has been at the top of his game for almost half his life, would be an unjust comparison. Perceive her solely by her track record, and it’s clear that the she has the moxie for greater things to come.

For now, she’s still learning (life lessons by way of parenting, although when it comes to picking up a new skill or subject of interest, she admits it’s difficult and likens the mind of a child to a sponge and an adult’s soap: “Water just comes and goes, and I hope I can calm and slow myself down.”). She’s still taking up that next gig (another action film is in the making, but Quinlivan is up for the challenge of portraying a character with a disability next — inspired by Dwayne Johnson’s Sawyer, an amputee). And she intends on taking her craft to the next level (and hopes to return to acting school before she turns 30).

But the kids are, rightfully so, her ultimate priority. “I might move somewhere just for their education. I’m looking into both the British and American education systems; it really depends on the path you want to lead them on. I don’t want them to lose the opportunity to get ahead.” On a personal level, an alchemy of fate and conviction is her compass: “I’m quite easy going. I think of it as another open door for myself, because I will still be learning.”

This article was first seen in ELLE Singapore’s December issue.

Ferragamo Has the Low-down on Nailing Hollywood Glamour