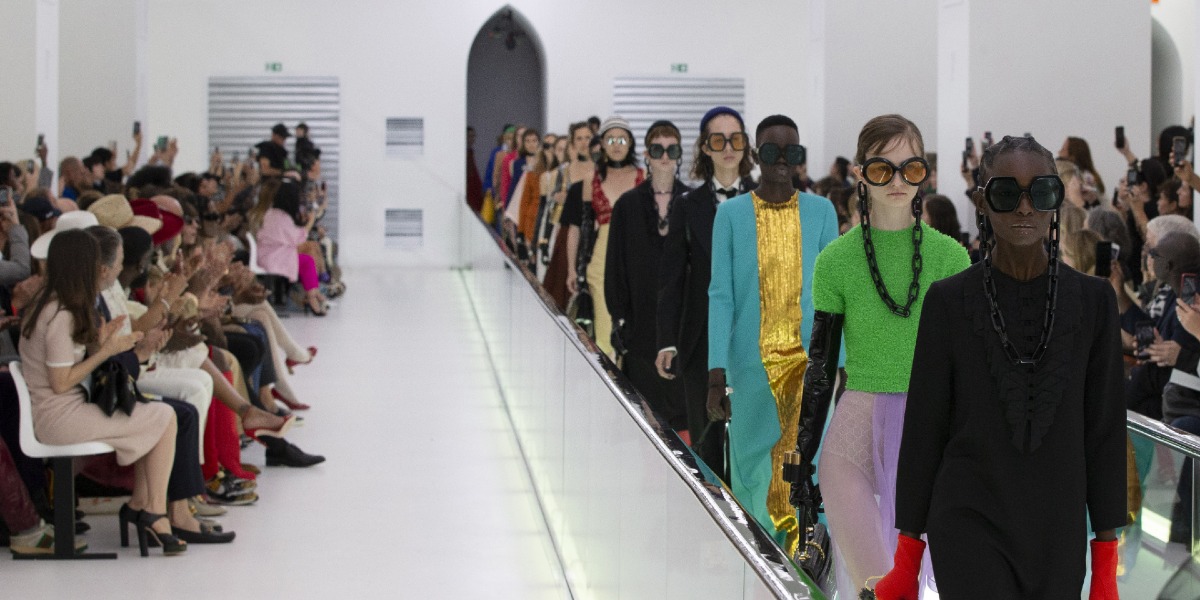 Enveloped in dim red lighting, the room is awash in a blanket stillness broken occasionally by stray whispers. Then, a flash of white that lights up the room to reveal models dressed in white straitjackets or variations thereof, emerging from four aqua-toned airport travelators motionless, dead-eyed and completely devoid of emotion as a voice whispers overhead, “I don’t think…I don’t even know what normal would be…”

Developmental psychologist Erik Erikson said: “In the social jungle of human existence, there is no feeling of being alive without a sense of identity.” And a social jungle it is. Staged in a mass-production factory setting, the Gucci SS’ 20 show’s prelude of white utilitarian clothing and normative dress represented society’s uniform at its most immaculately buffed, pressed and polished, in a sterile and hostile atmosphere. An aptly powerful metaphor for the power exercised from the time of sovereignty to the present governing bodies that prescribe, regulate and contain a monolithic threshold of normativity, de-legitimising and symbolising the suppression of identities for those who fall outside these parameters.

Alessandro Michele offers a reparation of these conformities, a de-regulation of sorts if you will, in a lineup that venerates diversity: creating a poetic space of openness that encourages unabashed, unapologetic self-expression and empowers self-affirmation of one’s own existence. And he refuses to be boring about it. Replete with eclectic colour and glitter, the collection presented 89 looks that focused heavily on graphic colour-blocking to accentuate tailoring reminiscent of the fashion house’s ’70s heyday silhouettes.

In line with the collection’s vision, Michele embraced provocateur wear including riding crops (a cheeky — excuse the pun — reference to S&M) that accessorised lace-inset slip dresses and black vinyl chokers accompanying scoop-neck leotards and high-slit midi skirts, both of which were often completely sheer, exemplifying ownership of the body. As a finishing touch, tailor labels on sleeve cuffs and trouser hems that read Gucci Orgasmique or Gucci Eterotopia saluted the collection, the latter being a deliberate and celebratory reclamation of the “Other” discursive spaces so often shunned by institutions of power.