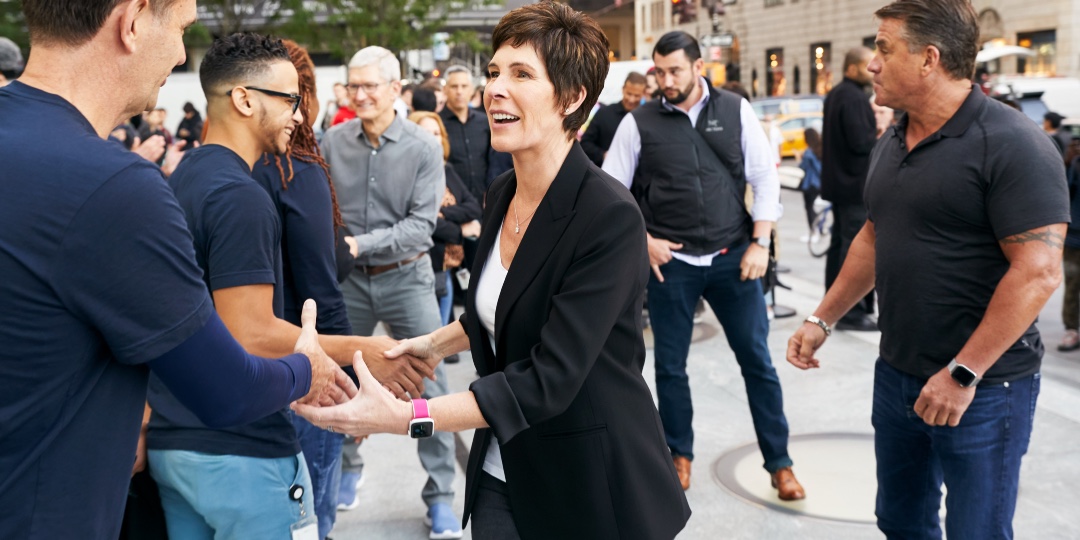 The tech juggernaut in recent years has generated headlines for more than its A13 Bionic chips and breakable-unbreakable windows. More than, there’s the term ‘company culture’ which has become somewhat of a buzz word for many in the workforce; it’s dissected in journalism, hashed out in applicant interviews, and sometimes, lamented about over drinks with friends. According to Forbes, the top five companies that excel in fostering positive culture in 2019 hail from the tech universe — of which their employees articulate the culture they love in terms of opportunities, work-life balance and diversity in the office, to name just a few factors.

Deirdre O’Brien, Apple’s senior vice president of Retail + People, was an undergraduate majoring in operations and supply chain at Michigan State University when Apple, amongst other companies, dropped by on a recruitment visit . O’Brien says, “The moment the Apple team walked into the room and started talking to us, I knew I wanted to work at Apple.” She continues, “You could tell they truly loved their work.” From a start scheduling production timelines in a factory that built Macintosh products, to growing Apple’s supply chain and being a part of the lift off of their first online and brick-and-mortar stores, 30 years later she oversees its retail experiences and people — of which there are about 150, 000 Apple employees globally — and reports directly to CEO Tim Cook.

Ergo, when it comes to Apple’s company culture, O’Brien now has a hand in both how its employees are empowered and inspired to create, in synergy, behind closed doors, and also the way in which their retail assistants interact with the world-at-large that streams into their stores. On a visit to Singapore last week, O’Brien sat down with ELLE Singapore to talk about the culture at Apple, the type of leader she is, and how one can effect change in a positive manner.

Like love, there’s no better way to tell of culture than stories, and in speaking with O’Brien, its essence at Apple can be summed up in one sentence: “We say that our soul is our people, and that I felt from the moment I walked in the door 30 years ago.” Its people are then galvanised through a focus on teamwork, and having diverse representation in the workplace (as of 2018, 33 per cent of Apple’s employees are women, and in America, 24 per cent of all employees are of underrepresented minority groups). As for setting the direction of Apple’s culture, “We talk about bringing our whole self to work. With that, it feels like you make a difference,” explains O’Brien. “It’s an inspiring environment and so you end up learning from each other; one of the things I really focused on from day one was learning from my colleagues.”

“It’s the idea of how you show up everyday, the relationships you have with your colleagues, and the emphasis you put into your work, that just creates this incredible, good energy.”

It just so happens that ’tis the season that difficult/horrible/unsympathetic bosses are poked at in many a Christmas gift guide. But in reality, anyone who’s had to manage anyone — be it a single person or a team — knows that it’s never a walk in the park, and to each their own in leading the charge. For O’Brien, it’s the spirit of togetherness that’s key. “I share this with the teams that I am a part of: As a leader, I understand my responsibility is to support the team, but that doesn’t necessarily mean I’m always going to have the best ideas,” she says. “I want to make sure the team feels a part of setting direction, and the best ideas are shared and discussed, and we all feel directly connected to the direction.”

In taking charge in the workplace, introducing change is then the perennial tricky situation that requires a well-thought out approach, lest it gives rise to uncertainty and unhappiness. For a smooth transition, O’Brien suggests, “Being clear about why you want the change — its importance and goal — helps people get through that period of lack of comfort. Because you can see what’s the goodness at the end.”

“Embrace the uncertainty and communicate to figure out why people are uncomfortable. In driving change, it’s really important to check in along the way.”

The community — and fan base — that the brand has cultivated can’t be solely measured by just technology metrics that are the iPhone 11 Pro‘s sick night mode, or the AirPods Pro’s extremely effective noise cancelling function. Walk into any Apple store, and the forthcoming warmth and dedication of its retail assistants is apparent, no matter the locale you’re in. Feel like picking up a new hobby? A Today At Apple session at their stores — led by experts of their fields, spanning photography, art and coding to name a few — will clue you in. Yet, neither its customer service nor fringe activities too, go the full length to illustrate the top-to-toe allure of the brand. O’Brien emphasises, “Forming connections, the ability to collaborate, and feeling like the success of the team is the number one priority, is always the first thing I look out for [in employees],” of which the heart and overall success of the tech behemoth is ultimately, its people.

“A welcoming, inclusive and diverse environment — combined with the culture of respect — is what really allows people to do the best work of their lives.”

Nightmare Before Christmas: Gifts For Tough Relatives and Friends