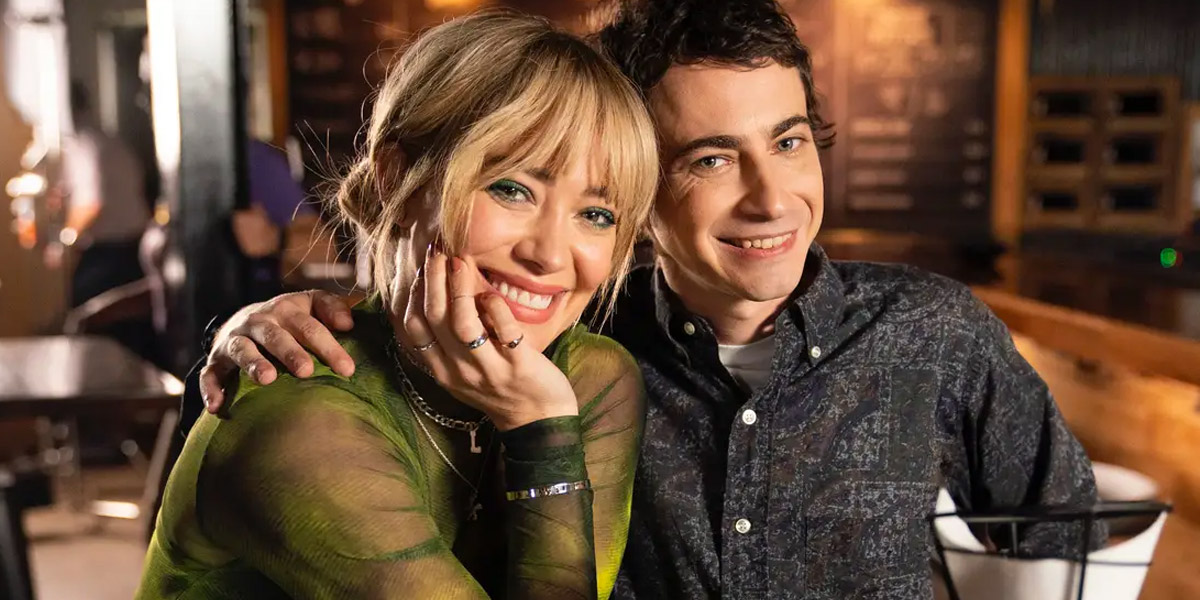 Lizzie McGuire is headed back to the screen—albeit with a delay. Variety reported in January that original Lizzie McGuire creator Terri Minsky is “stepping away from her role as showrunner” on the Disney+ revival. The outlet confirmed that production on the series was on hiatus as Disney searched for a new showrunner and star Hilary Duff honeymooned with her new husband, Matthew Koma. Now, Duff has hinted at a reason for the interruption—and it connects to another Disney+ series. As previously reported, the Lizzie McGuire reboot will follow an adult Lizzie as she navigates life in New York City. The show started filming in early November.

Here, everything we know about the reboot of our favorite character—and all the actors who will be joining her onscreen.

Why is the Lizzie McGuire reboot delayed?

At the start of the year, Disney released a statement confirming the show’s break, following the exit of OG series creator Terri Minsky. “Fans have a sentimental attachment to Lizzie McGuire and high expectations for a new series,” said a Disney spokesperson. “After filming two episodes, we concluded that we need to move in a different creative direction and are putting a new lens on the show.”

News about filming stalled until February 26, when The Hollywood Reporter reported that a Love, Simon-inspired series, Love, Victor would move from Disney+ to Hulu. The shift is reportedly due to the show’s “adult themes,” including, “alcohol use, marital issues (among the parents) and sexual exploration.” Duff shared a screenshot of the news to her Instagram Story, circling the headline and writing, “Sounds familiar..”

The star’s post suggests that Lizzie McGuire could follow series Love, Victor and High Fidelity in moving from Disney+ to Hulu.

When will the series be out?

There’s still no official release date for the show.

Duff revealed news of the reboot on Instagram in August, shortly after the show was announced at the D23 Expo. “SURPRISE!!! I’ve been trying to contain this excitement for a loooong time while this has been in the works!” she wrote. “I am beyond excited to be home again, back with my girl ♥️…and into her 30’s.”

SURPRISE!!! I’ve been trying to contain this excitement for a loooong time while this has been in the works! I am beyond excited to be home again, back with my girl ♥️…and into her 30’s #bringbackbutterflyclips #lizziemcguire #thisiswhatdreamsaremadeof #lizzieforpresident #DisneyPlus #D23Expo . . . . . . Also, If you needed yet another reason to get Disney+ ….the #lizziemcguiremovie will be living there!

On October 29, Duff revealed she has begun filming the new series. She took to Instagram to share a photo of herself dressed as the iconic character in New York City’s Washington Square Park. Duff captioned the snap, “Happy first LIZZIE day!!!!! NYC…..cue the rain ???? ✌???? ☺️ ???? #lizziemcguire.”

It’s likely Duff will continue sharing behind-the-scenes peeks at the show on her Instagram. On November 19, she shared a shot of herself in character, wearing a Lisa Frank shirt and Lizzie’s signature bangs.

What will it be about?

The new series will follow Lizzie in New York City 0n the cusp of her 30th birthday. An official description of the project reads:

The new story picks up as Lizzie McGuire is just about to turn 30. She seemingly has it all—her dream job as an assistant to a fancy New York City decorator, her dream guy, and a picturesque Brooklyn apartment—but things aren’t always as they seem. With a little help from her friends, her loving family and her 13-year-old alter-ego in animated form, Lizzie navigates the ups and downs of adulthood.

Duff spoke to Entertainment Tonight about reviving the beloved character in a new phase of her life. “It feels very surreal, to be honest. I’ve been living with this information for a few months now, so it’s been very hard to even contain my excitement,” she said. “She’s such a big part of me and my life, and now she’s 30, and I feel like I’m going to have to learn some of her quirky faces again. But I’m excited!”

While she kept most of the details under wraps, Duff did hint at the possibility that many of the original cast members will be returning for the reboot.

“The chances are high! I can’t tell you too much, but I think that people are going to be very surprised and excited.”

So which cast members can we expect to return?

On October 24, Disney+ confirmed that Hallie Todd, Robert Carradine, and Jake Thomas will reprise their roles as mom Jo, dad Sam, and brother Matt McGuire, on the upcoming reboot. A photo of the TV family at a read-through of the show’s first episode hit Twitter on Thursday.

“We are incredibly excited to bring back one of the most popular Disney Channel series of all time along with some beloved and familiar faces,” said Ricky Strauss, Disney+ president, content & marketing, in a statement. “With Terri at the helm and Hilary, Hallie, Robert, and Jake back after all these years, it’s our honor to welcome the McGuire family into the Disney+ family.”

Disney+ confirmed in November that Adam Lamberg, who played Lizzie’s best friend/potential love interest on Lizzie McGuire, will appear in the reboot of the series.

“Gordo was an essential piece of the puzzle to what made the original Lizzie McGuire so authentic and beloved,” Hilary Duff said in a statement. “I couldn’t imagine the series without him. I can’t wait for fans to see what he’s up to 15 years later and how he fits into Lizzie’s adult world.”

McGuire and Lamberg also confirmed the news with a video on the official Disney+ Twitter account, with Lamberg joking, “This is what dreams are made of.”

Hey now, hey now! @HilaryDuff has a special announcement about #LizzieMcGuire, the Original Series coming soon to #DisneyPlus. Watch to find out! pic.twitter.com/9rHGkPU2Xf

Are Lizzie and Gordo still A Thing?

Though Lamberg is returning to the show, it’s unclear if the Lizzie-Gordo love story developed in 2003’s The Lizzie McGuire Movie will continue. They won’t be together at the start of the series. During an appearance on Good Morning America, Duff said Lizzie “has a gorgeous fiancé who is this chef at this cool Soho restaurant.” She added that, at the revival’s start, “She has a cute little apartment in Brooklyn and everything is going her way and she’s celebrating her 30th birthday with all of her friends.”

In an interview with Vulture, Duff clarified that Lizzie would return to LA, “She’s not going to stay in Brooklyn too long, actually. That’s where she’s been, but she’ll be coming back to Los Angeles. She’s forced out of New York. She’s like, I can’t be here anymore.“

When asked if she was upset that Gordo didn’t ultimately end up with Lizzie, Duff replied, “You know what, I don’t know if I was as devastated by that,” adding, “I feel like them not being together is what was so good…it’s that one person that you’re like, Was he the one? Is it ever going to be? You’re always kind of wondering. We wanted it to hurt everyone a little bit, and it’ll continue to hurt.”

Although the status of Lizzie and Gordo’s relationship is TBD, Duff hinted to E! that her feelings for the popular Ethan Craft (Clayton Snyder) linger. “He is hot. He’s very hot,” she admitted. “I’m pretty sure there’s going to be, there’s going to be a thing.”

Duff, who is now a mother of two, said that her oldest child, 7-year-old Luca, isn’t exactly as excited as the rest of the world to see Lizzie coming back to the small screen.

“He got really into it and then he’s like, ‘I’m done,’” she told People. “I think he’s pretty fascinated to see me so young, not looking the same. He knows that’s his mom but he got over it fast. It’s pretty funny, he’s not there yet. I feel like I need to let him know that this was the show that started it all for me and what’s gonna happen when the second phase of that is happening.”

She also reflected on what it was like to revisit the 2003 movie with her son Luca and partner Matthew Koma with E! . “I have been watching a lot of shows and I figured, I should probably watch the movie, too,” she said. “I haven’t seen it since the premiere night. That was a really crazy time in my life. I had had a lot of Lizzie McGuire. I shot 65 episodes in under two2 years and then did the movie and I was like, ‘I never want to see her again.’ And then, as I got older, I realised how much I love her, and how much that means to me, and how important of a character that was in my life.”