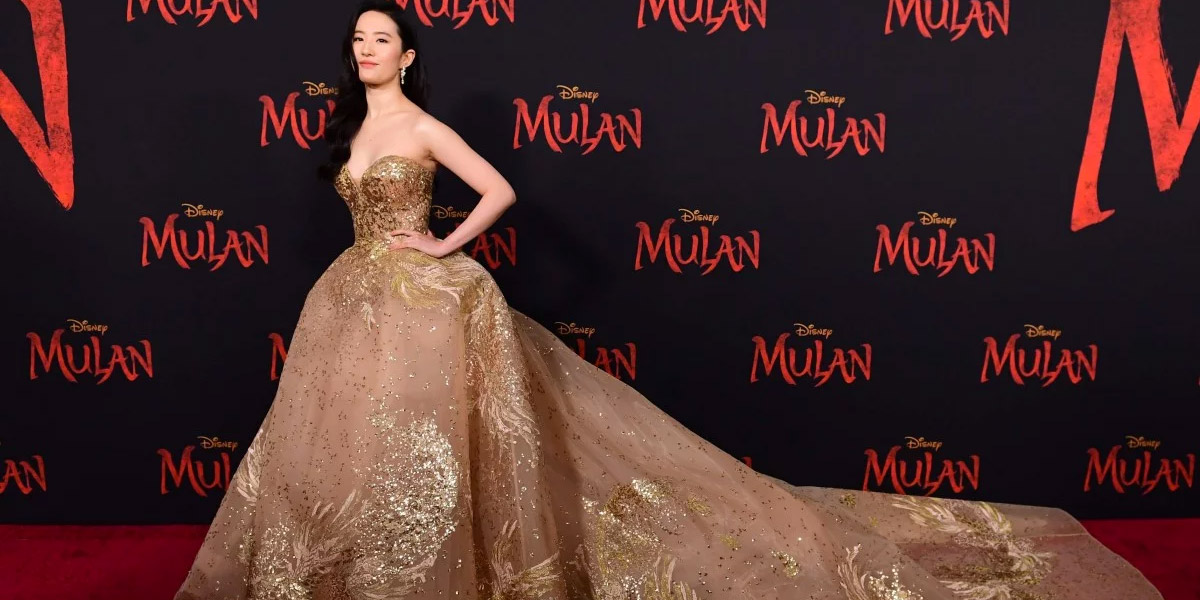 It’s almost spring, and another live-action adaptation of a Disney cartoon classic is about to open in theaters. Mulan comes out on March 27, and the cast attended the world premiere of the film in Hollywood last night. Liu Yifei, who plays Mulan, came dressed in the most Disney princess of gold dresses, wearing a strapless Elie Saab gown with an enormous train. It was a lot of look and required multiple people assisting with the train:

Related article: Everything You Need To Know About Liu Yifei, Star Of Disney’s Mulan

The gown first made an appearance on the Elie Saab Fall 2019 couture collection and featured a rising phoenix motif, rendered in gold embroidery and sequins.

Mulan‘s director Niki Caro did an interview with The Hollywood Reporter where Caro touched on just how much prep Yifei did to prepare to play Mulan.

“I was determined that whoever played Mulan was not going to be fragile and feminine,” Caro told the outlet. “She had to pass as a man in a man’s army.” Yifei went through a 90-minute physical assessment during her audition that included extreme cardio and weight exercises.

“Boy, did they [other actresses] flame out,” Caro with a laugh, reflecting on how other potential leads fared with the physical portion. Yifei, meanwhile, “never complained once, never said, ‘I can’t.’ She went to her limits.”

Yifei went on to train three months for her role, where she plays a woman posing as a male soldier.

Caro said she wanted to make Mulan a real war movie that had elaborate battle sequences but still worked for Disney’s core family audience. “You have to deliver on the war of it, and how do you do that under the Disney brand where you can’t show any violence, gratuitous or otherwise?” she said. “Those sequences, I’m proud of them. They’re really beautiful and epic — but you can still take kids. No blood is shed. It’s not Game of Thrones.“

This article originally appeared on ELLE US with additional reporting by Hanan Haddad.