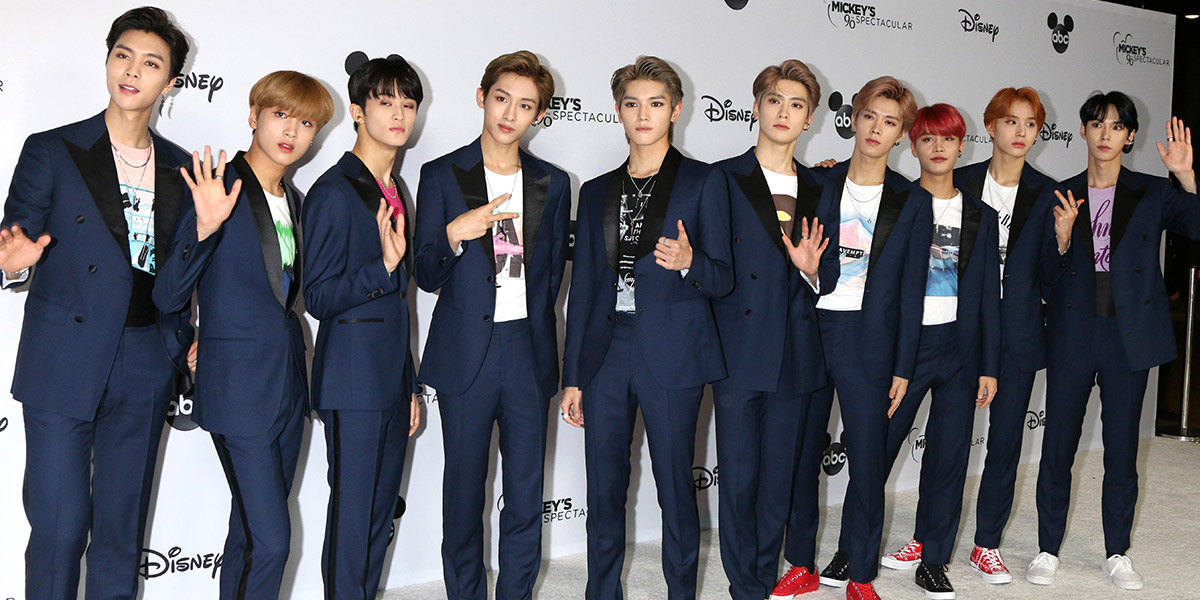 Back in November, NCT 127 made history as the first K-pop group to perform in the Macy’s Thanksgiving Day parade, bringing Korean pop music to one of the most highly-viewed televised events in the U.S. But the moment was only a prologue to the boys’ big plans for 2020. NCT 127 is the Seoul-based sub-unit of SM Entertainment’s NCT boy band. (Other sub-units include NCT U, the youth-based NCT Dream, and China’s WayV.) But it’s also the iteration of NCT that’s making the biggest waves in the U.S. right now.

Members Taeyong, Mark, Doyoung, Haechan, Jaehyun, Johnny, Jungwoo, Yuta, and Taeil just released their second album, Neo Zone,on March 6. In June, the boys will hit six major U.S. cities to perform on their second North American tour and first-ever U.S. arena tour. (As of press time, NCT 127’s tour has not been postponed due to COVID-19, although that, like all tours, could change.)

Their fan base, NCTzens, buzz about the boys constantly on social media. Their Instagram following is 6.9 million strong an on YouTube, they have 1.28 million subscribers. Their video for “Kick It,” the lead single of their visual album Neo Zone, has over 21 million views. The boys feel the weight—and privilege—of being part of a group of K-pop artists taking South Korean pop music mainstream abroad. “I do feel a sense of responsibility to work harder and make sure K-pop has its moment in getting recognition all around the world,” Jaehyun tells ELLE.com.

Via email, the boys open up about their new album and songwriting process, their decision to embrace a sexier style with their comeback, and what to expect from their tour—both onstage and off.

ELLE: What is your dream career milestone in the U.S.?

Doyoung: I was really happy when Superhuman did well on the Billboard charts [NCT 127’s last EP, We Are Superhuman, peaked at #11 on the Billboard Hot 200 and #1 on the World Albums Charts in June 2019]. And it wasn’t just me—our fans were ecstatic too. I’d love to continue to achieve memorable milestones like that as a way of giving back to the fans who show us so much love.

Johnny: It was cool to see our last album do well on the Billboard charts, and we hope for the same with our second full-length album this time. And as a personal milestone, I’d love to be a brand ambassador for a coffee brand. [Laughs]

For people new to NCT 127, what songs do you recommend they listen to?

Taeil: “Firetruck”! It’s our debut song, but it’s also one of my personal favourites.

Haechan: “Kick It.” It’s the title track of our latest album, and I think it’s a song that really showcases NCT 127’s style and character as a group. It’s one of those songs that make an impact once you hear it.

What song are each of you most proud of on Neo Zone?

Johnny: “Kick It”! I think our performance onstage is awesome, and I feel really proud of us.

Taeyong: “Kick It.” I personally think it’s a special song that represents us as a group so well. I hope you all like it!

Yuta: I’d say “Kick It.” The powerful beat really takes over the stage—I like that.

Doyoung: “Kick It.” Since it’s the title track, we put even more focus when preparing and putting the song together.

Jaehyun: “White Night.” I paid a lot of attention on the vocal delivery because it’s a sentimental song.

Jungwoo: “Interlude.” It’s the song that illustrates the overall storyline—beginning to end—of the entire album, highlighting our distinct style.

Mark: I’d have to say “Kick It.” It’s not only my favorite song of this album, but it’s also a title track that showcases our charms in the best way.

Haechan: “Kick It.” It’s a title track that’s really impactful, and the performance is also impressive, in my opinion. It’s one of the most “NCT 127”-style songs of the album.

What message do you hope fans take from this album as a whole?

Doyoung: I hope our music has the power to help heal any trauma our fans might have.

Haechan: I want to become our fans’ hero!

Mark, Taeyong and Johnny, you all wrote “Pandora’s Box” and “Love Song” for this album, while Mark and Taeyong co-wrote “Mad Dog.” What was the process of writing them like?

Mark: I found myself having a lot of fun. I put a lot of thought into making sure the lyrics matched with the songs I was writing them for—and it was enjoyable because all the songs were so good!

Taeyong: I got inspiration from my own personal experiences and the overall atmosphere and subject of the song, and put those two together. And this time around, it was more of a team effort—rather than relying solely on my own creativity, I wrote my lyrics so they flowed well with Johnny and Mark’s rhyming and flow.

Johnny: I drew a lot of inspiration from movies I’ve watched. I wrote my lyrics thinking about the stories of the main characters in those movies.

Mark and Taeyong, how has your songwriting evolved from your last project to this one?

Mark: I think I’ve evolved and changed more than the actual process of my songwriting. Compared to the last time, I tried to focus on adding more melodies to the song.

Taeyong: I tried to be more comfortable and relaxed throughout the process and just enjoy myself.

What should fans expect from this tour?

Doyoung: I hope our fans expect to see the very diverse sides of our group and a lot of new performances. And on days we’re not performing, I want to explore the cities we visit and make memories there!

Yuta: We’ve been preparing a lot of songs and performances that specifically point to our memories with our fans and also lots of cool individual performances, so you can look forward to that! Outside performing at our shows, I’d love to hit up places we didn’t get to visit last time and go shopping and just enjoy my time in those areas.

You have a sexier look for this album era. How has each of your styles changed? Who are your fashion icons currently?

Jungwoo: We put in a lot of thought and effort to showcase a more powerful, impactful style—and I’m so grateful our fans are enjoying it. You get a sense of what makes NCT 127 the group that we are. For my personal style, I usually like wearing simple and clean-cut clothing. On the daily, I’ll wear comfortable workout or athletic gear, but when I want to dress up a bit more, I gravitate towards a more normcore look.

Yuta: Because we’ve been in front of the camera a lot and have done many performances and concerts, I think we all started to master the “art of looking cool.” [Laughs] It’s not just for me, but every member has gained their own aura or sense of presence onstage that showcases that look you refer to. On a personal note, I enjoy vintage or street styling, and I think our latest album’s concept meshed well with my own personal style, so I had a lot of fun.

You all are excellent vloggers. What can fans look forward to on YouTube during your tour?

Johnny: I always want to use my YouTube channel JCC (Johnny’s Communication Center) to explore and show our fans new content. Every month, I try to make sure to shoot content that’s new and personal. Like you’ve see on JCC, I’ve tried new things like learning how to be a barista or doing yoga.

Jaehyun: I really enjoy traveling, so I want to eventually shoot some travel content. Maybe one day go on a beach trip and do a vlog!

Do you guys have any special pre-show or post-show rituals as a group?

All: We come together, put our hands in the middle and yell, “Let’s kaja (Let’s go!)” before we hit the stage.

What’s your favorite thing to do on a day off with each other?

Taeil: We talk a lot. And because we love joking around, sometimes we’ll just be saying jokes to each other all day.

Jungwoo: Sometimes we go out to eat or go shopping. When we’re not busy, we like to chill in our dorm and watch movies or play games together.

What’s been your favourite hair colour so far?

Taeil: I like the blonde hair I have for this new album. I think I pull it off really well!

Taeyong: I really liked the pink hair I had during our “Cherry Bomb” era.

Yuta: My red hair! I used to think my favorite was gray, but I think red looks best both onstage and off. And it complements almost any outfit you wear. When you put it up, it looks very glamorous, but when it’s down, it has a more sexy, mature look, so it showcases many different sides of myself.

Doyoung: Black! I think that color just looks best on me.

Jaehyun: I personally liked the colors that have a bit of an ash gray tone to it.

Jungwoo: Orange. I think it looks very fresh and young—super lively. And it was a color I’d never tried before, so that was a cool phase.

Mark: I’d say black. Because it’s my natural hair colour, and many people have said that colour looks best on me.

Haechan: Probably brown. I think it suits me best.