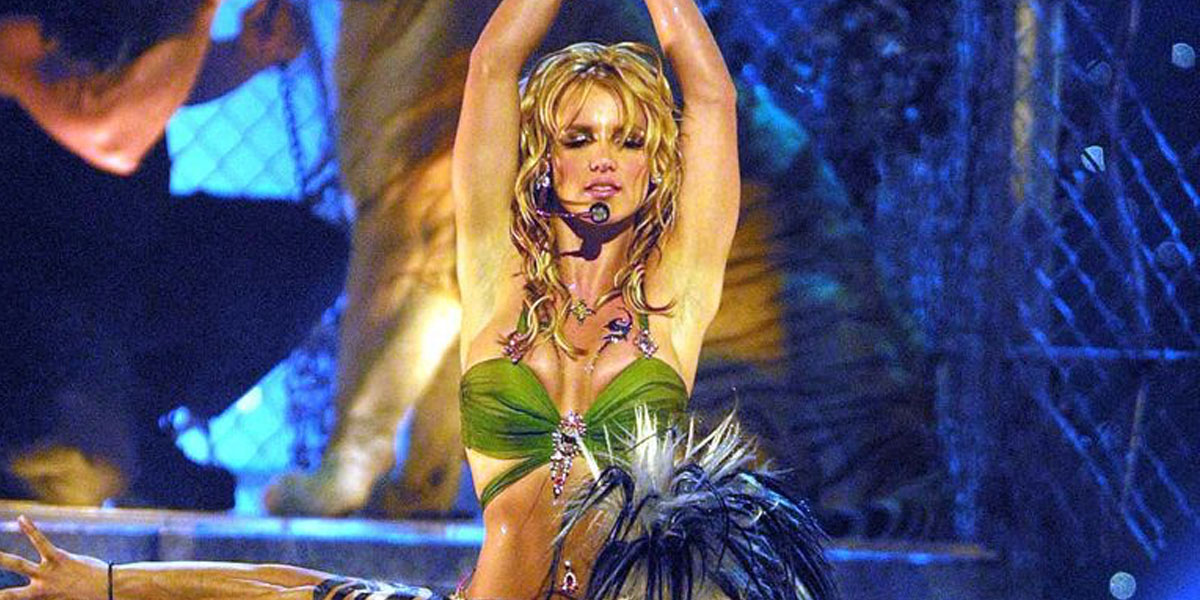 Justin Timberlake. Madonna. Christina Aguilera. These names might have been commonly associated with Britney Spears during her 20-year career, but it appears that there are a few other celeb connections that have gone under the radar. Earlier this month, Netflix viewers around the world became obsessed with the streaming service’s latest bizarre docu-series Tiger King which, to put it as simply as possible, explores the lives of wild cat owners, controversial animal parks, rumoured murders and multiple romantic relationships.

However, this week fans of the show have come across footage of exotic animal handler Doc Antle (otherwise known as Dr. Bhagavan Antle) on stage with Spears in her 2001 MTV Video Music Awards performance of ‘Slave 4 U’ at New York’s Metropolitan Opera House.

And to say our minds are blown is as much of an understatement as admitting we kinda like Carol Baskin’s leopard-print wardrobe.

Newly resurfaced snaps show Antle handling an enormous chained tiger on stage as the then 20-year-old singer prepared for her performance. In the snaps, the handler sports dark brown hair – a vast change from his long, blonde locks in the series.

Though some were shocked and awed by the fact that Antle and Spears worked together, many were also saddened or dismayed, because Doc Antle does not have the best reputation after the Netflix show.

Fans of the TV series will be all too aware that Antle is known to have had three young female romantic partners living on his 50-acre wildlife park and that he appears to run a cult-like hierarchy among these employees – allegedly presiding over everything they do, from choosing their revealing work ‘uniforms’ (mostly bikinis and leotards), to when they are or are not allowed to leave the zoo.

Former park employee, Barbara Fisher – who worked under Antle from 1999 to 2007 – alleged that he liked to be his apprentices’ first sexual partners, de-flowering them so that ‘they would be bonded to him in this way, where he felt like he could get them to do anything’. Antle denies Fisher’s claims.

Considering that the show alleges that these women were in some way Antle’s captives, it feels unnerving to see Doc in the background of a performance of Spears’ hit song ‘Slave 4 U.’

Britney Spears could have ended up as one of Doc Antle’s women. pic.twitter.com/Q7Mdv9fEtD

Hey @britneyspears now that you see how crazy Doc Antle is do you look back at the 2001 VMA’s and think how lucky you are to be alive? Did Doc try to make you one of his wives? Oh I also think your were lip syncing but it’s cool.

TIGER KING DELETED SCENE: Doc Antle is ready for his closeup with Britney Spears at the 2001 VMAs pic.twitter.com/ZDfKMuJqI4

In another photo taken at the show, documentary star Baskin is also seen sitting next to the singer following her performance.

. @britneyspears did Carole Baskin from “Tiger King” admit to you that she killed her husband when she sat next to you at the VMAs? pic.twitter.com/tcM2mFtZEt

Tiger trader Joe Exotic and big cat owner Carole Baskin are two of the biggest stars of the series.

In the programme, it is mentioned that Baskin’s ex husband Don went missing 21 years ago, with several people in the documentary accusing her of killing him.

However, Baskin – who runs the Big Cat Rescue sanctuary in Florida – recently wrote a long post on her website claiming that the interviewees in the series are ‘not credible’.

So glad this is released to the world during this time. #hooked #tigerking #netflix

‘The series presents this without any regard for the truth or in most cases even giving me an opportunity before publication to rebut the absurd claims.’

#WFH Stories: This Is Why Working From Home Has Been Just As Chaotic As The Office