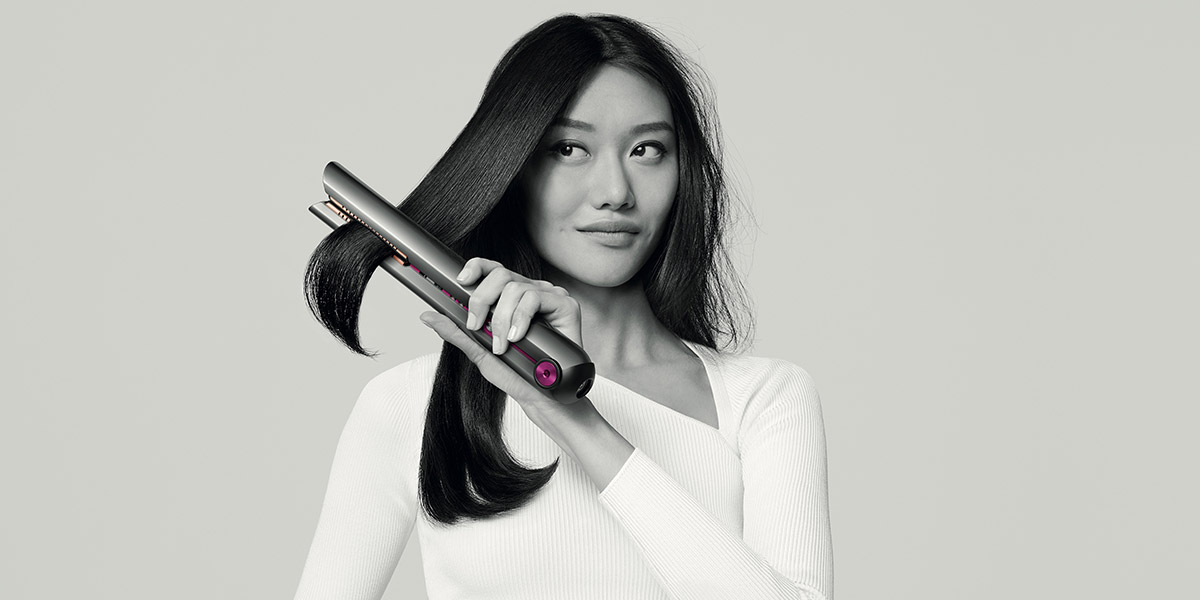 After great runs — nay, marathons — with the Supersonic and the Airwrap, it’s about time innovative tech giant Dyson came up with a hair straightener to complete the hair tool trinity. After all, it’s in their DNA to take product innovation to the next level, and that’s what they did with a hairdryer and curler; they solved common consumer concerns with in-built tech, making usage of tools as intuitive (and sexy) as it can be.

Now, I wouldn’t say that I’ve been waiting for a Dyson hair straightener — the Corrale — but I must say that I’ve expected it. The Supersonic and Airwrap are perfect tools for my hair styling needs; one to blow dry my hair in minutes, the other, a super easy way to get beautiful curls. I am not one to use a hair straightener (between you and I, I haven’t touched one since I was 16), simply because I prefer my hair curled. But of course, there are many out there who enjoy the sleekness of shiny, straight hair — my mum, for example, straightens her hair every night before bed, just so her hair “won’t get frizzy in the morning”.

The Corrale, according to Dyson, has not only been tested on 800 participants with different hair types from all over the world, but also went through rigourous trial by leading celebrity hairstylists (aka the like of Jen Atkin to Larry King). But what it hasn’t gone through is the hands of a hair straightener novice like myself — someone who doesn’t quite know the ins and outs of a hair straightener’s anatomy — and therefore will judge it fairly based on its truest potential, plus whether or not it’s worth your coin.

So, what’s the deal?

I have an ex-colleague who straightens her hair with a respectable straightener at 210 degree Celsius every single day, and she’s petrified that she might one day yank chunks of hair off. That’s perhaps the biggest concern of hair straightener users — overheating.

Here’s where the Corrale comes in: it uses patented flexing plates that reduces the user’s reliance on heat for hair to be straightened. Now, heat is definitely needed in this styling process — hydrogen bonds in the hair need to be broken and reshaped for the desired straightness. The reduced reliance on heat is created due to the flexing plates (the gold “teeth”) that intuitively collect hair in that segment to stop strands from splaying. As the user straightens their hair, heat and tension is applied evenly, so you get the result that you want quick (my hair was straightened in just one pull) without having to repeat the process multiple times.

Using the straightener was, well, straightforward; simply turn it on, select your desired temperature, and get going. There are three heat settings — 165, 185, and 210 degree Celsius. The Corrale has a platinum sensor that measures the selected temperature that you’re working with 100 times a second, so that heat doesn’t fluctuate, and you don’t damage your hair. Long, chest-length hair like mine took 10 minutes to straighten, on the lowest heat setting. My mother, who has thick shoulder-length hair, managed to straighten her tresses in 10 minutes too, with the middle heat setting.

The Corrale is not plugged in to a socket…?

That’s because it can be used cordless, for about 30-45 minutes with a full charge. The cord-free feature works like their vacuum cleaners, and it’s probably my favourite feature of the Corrale. Hair straightening and styling is made super convenient without having to deal with meddlesome wires that restrict hand movements. I can straighten my hair literally, anywhere, and it’s amazing.

Being able to use the Corrale cordless also means that you can curl your hair with it, like I tried. As mentioned, I am in no way a professional at using a hair straightener, so it did take some trial-and-error before I was able to get decent-looking “ribbon curls”. That said, the straightener does have some weight to it — it works great for hair straightening as it guides your hand downwards, but when you have to twist and turn for the curl — there is difficulty with the weight of the Corrale.

Is Becca’s Zero No-Pigment Virtual Foundation The Game-Changing Makeup In An Era Of Mask-Wearing?

Any other special features?

One last one — should you be travelling with the Corrale, there’s no need to worry that your tool will turn itself on in your luggage. On the back of the straightener, there’s a “flight mode” tab that disengages the tool from any accidental heat-ups. Simply plug it out, store the tool, and fit it back into the straightener when you’re ready to use it again.

Finally… to buy, or not to buy?

If you have to straighten your hair daily without fail, the Corrale is a great tool to have at hand. Like all of the other Dyson hairstyling devices, it serves to solve consumer woes in a sustainable, and technologically advanced way. The innovation behind reducing heat reliance to straighten hair is one-of-a-kind, which makes the straightener an investment piece in itself that garners two thumbs up. At $699, the Corrale is indeed a splurge, so get it only if your purse strings aren’t tied up.

Easy Hairstyles For Every #WFH Occasion That Aren’t Ponytails