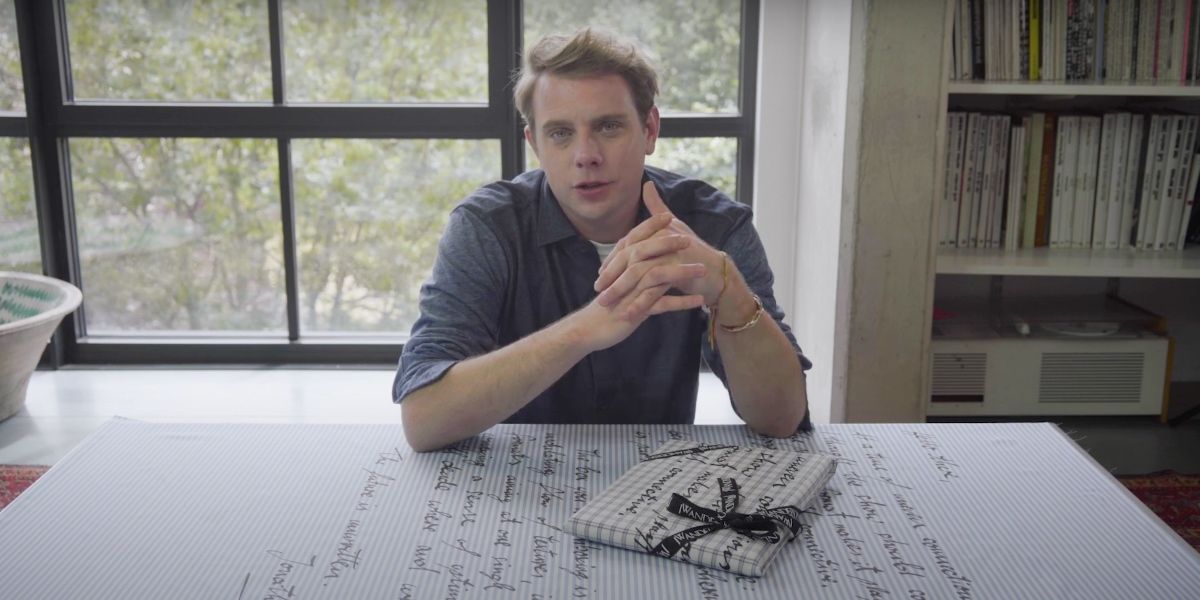 Jonathan Anderson‘s unorthodox point of view has always set him — and his clothing — apart in fashion, a space that’s become increasingly crowded in the recent years. We live in a time where a printed T-shirt, hype and an Instagram following can make a brand, but Anderson has continuously cut through the noise with the opposite: that is, uncompromised creativity, spotlighting the handmade, and blurring the lines between fashion and art.

This pandemic has seen many of us try to lead a semblance of our lives prior through digital devices, what with endless video calls, Instagram “parties” and, on the fashion front, brands putting on life-like virtual runway shows using CGI. Not this designer though, who has taken a step away from the digital race to offer up good ol’ tactility and a moment of quiet through his resort and menswear SS’21 collections at JW Anderson. (He admits: “I’m bored of looking at a screen.”)

He had mailed the essence of his collections to his audience — a kit that consists of the looks, pieces of fabric, pressed flowers and art (masks in collaboration with artist Pol Anglada) — in which he envisioned its recipients to sit down, touch, feel and discover them at their own pace.

In a Zoom interview with ELLE Singapore, Anderson reveals his creative process working on those collections from home, why he became more methodical during lockdown, and that he’s not getting too caught up in what lies ahead for fashion.

“I think we have to try to bring more important meaning into fashion so that it does not become obsolete as an art form.”

ELLE: Do you think these turbulent times could have possibly shifted what people want in clothing today, and was this something you considered in conceptualising both your collections?

JWA: I think the fashion industry is very obsessed with: What is next? What’s going to happen? Are people gonna change? I think you’ll be surprised how slow changes can be if it’s going to be constructive. For me, this is what I felt that I wanted to say this season. In a weird way, I’ve kind of become more excited about not predicting the future and just living in the present.

You mentioned that for the creation of these collections, you kind of slowed down and embraced what you did best. What was this process like for you, given the restrictions that were in place?

You know, it was difficult, but I think we came up with very good creative solutions to the pandemic. What was important is it really kind of was about a team effort and working together from each other’s homes to try to make it happen. So I think it really shows the power of creativity and what you can do under extreme situations — that creativity sometimes gets reinvented somehow.

Were there some some specific things that you did differently, as compared to how you would have done for your previous collections?

I haven’t worked on a mannequin for many years. I usually work with the body, so it’s been really nice to think of clothing as sculpture somehow — as like a sculptural format — and how you get personality [out of it], that’s why I worked with the artist, Pol Anglada, and I worked with the mask maker to give personality to something, and in a weird way to give humour.

Some pieces in the menswear collection don’t necessarily call to mind a certain decade or period in time. Why was that important or appealing to you?

I feel like it was important to create a neutrality in terms of timezone, time, place, time in history, because I [think] sometimes when you’re in a transition, it’s better to let the aesthetics roll into two pieces or one piece so it doesn’t become over complicated. You know, it’s not about styling.

You worked with an artist to create faces for the men’s collection. Those were incredibly expressive while your women’s looks had masks without expressions — kind of the opposite of each other. What was your creative process behind this and does it tie in with a larger idea that you had?

I think the men’s becomes kind of like boyish characters which are comical, that kind of [link up] to this idea of lunatics. They’re a bit crazy. And what I liked about the woman was I kind of saw her more sculptural — more grounded as a character. You know, this idea of looking to people like Barbara Hepworth, this idea of sculpture, this idea of the void, something [that] is spiralling — you could fall in love with something through it, you know? I liked the idea of what would it look like if it was in a museum.

What were some things that you kept yourself busy with during the lockdown period, and did that perhaps translate to or influence your work?

I tidied a lot, so I think in a weird way it’s this idea of being very uniform. When you go through the show, it’s very methodical, and I think through the process of being home a lot I came up with new routines and became more methodical. Everything’s very tidy and very precise that way.

Craft has always been something that is huge in your world. And I think during this period, a lot of people who perhaps didn’t have hobbies to do with it might have picked it up just because they’re home with more time on their hands. I was wondering if the way you see craft is any different compared to your previous collections?

I think it was the same because I’ve always believed in it; I’ve always believed in showing what people can make. And I think it has been really interesting to watch people make things, this crazy phenomenon of kids knitting Harry Styles sweaters — a sweater that we’d designed last season — and we had nearly 24,000 downloads of the pattern. I like that fashion can transcend out of its own box.

We’ve seen some brands, specifically for Shanghai Fashion Week, that really took the opportunity to push the boundaries with digital and present collections using CGI. You went in a different direction — why was this your approach?

I think everyone has been sitting at home and on a TV screen, and I’m bored of looking at a screen. I’m bored of being on my phone, and I’m bored of emails and I think what people want is tactility. So, I liked that you could have a quiet moment with fashion. I think fashion needs to learn to be a bit quieter, less schizophrenic, less hungry for likes.

In the past few months, the fashion industry has had to rethink its format and framework in general. What do you think is the purpose of fashion right now?

Well, I think it’s a creative process. I think we have to try to bring more important meaning into fashion so that it does not become obsolete as an art form. Fashion is important because it will tell you the moment that you’re in; if you look back at the ’20s, you know that the clothing was made in the ’20s. I think fashion has to become more sensual in the way in which it communicates, it has to be more responsible, and it has to be more inspiring. It’s important that fashion becomes more responsible actually, with what messages it puts out there.

During your presentation, you mentioned the value of not compromising being something that you’ve always identified with. How does that manifest in your work?

I think that you cannot compromise the end goal of clothing. I just believe the minute you compromise the initial idea, you end up diluting the message. So if you’re going to commit to something like this, then you have to do it.

And lastly, how would you sum up the message of your collections?

I think it’s a letter of optimism.

Will CGI Models, Robots And Virtual Fashion Shows Be The New Norm?

The Denim Skirt Is An Age Old Staple, But Here’s How To Style It