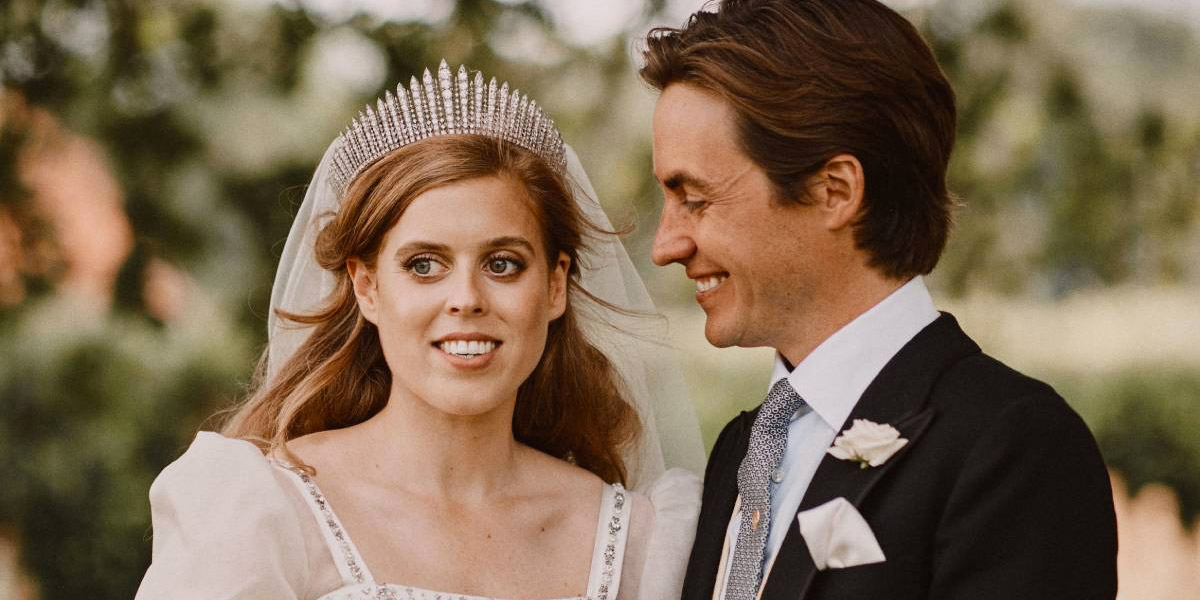 Princess Beatrice is a married woman after secretly tying the knot with multi-millionaire property developer Edoardo Mapelli Mozzi. Buckingham Palace confirmed the intimate wedding, which took place on Friday morning—two months after their nuptials were postponed due to the coronavirus pandemic.

“The private wedding ceremony of Princess Beatrice and Mr Edoardo Mapelli Mozzi took place at 11 a.m. on Friday 17th July at The Royal Chapel of All Saints at Royal Lodge, Windsor,” the Palace confirmed in a statement. “The small ceremony was attended by the Queen [Elizabeth II], the Duke of Edinburgh [Prince Philip] and close family. The wedding took place in accordance with all relevant Government Guidelines.”

According to The Sun, about 20 guests attended the secretive affair, including Queen Elizabeth, Prince Philip, and Beatrice’s parents Prince Andrew and Sarah Ferguson. It’s also likely that Princess Eugenie, Beatrice’s sister, and her husband Jack Brooksbank, made the scaled-down guest list. The couple married at All Saints Chapel, which is on the Royal property Andrew shares with his ex-wife Ferguson.

The Sun published photos of Queen Elizabeth and the Duke of Edinburgh leaving the event in the back of a car. They were reportedly headed to a knighthood ceremony for 100-year-old Captain Tom Moore. Photos from Princess Beatrice’s wedding are expected to be released later this weekend, so as not to upstage Moore’s honor. “They were obviously very keen for the Queen to come so the wedding had to happen before she goes up to Balmoral so this was a great opportunity,” a source told the Sun. “So many guests were disappointed not to make the big day but understood the reason for it,” the insider added.

Beatrice and Mozzi got engaged last September after about a year of dating. Back in February, their original wedding plans were announced with a 150-person ceremony set at the Chapel Royal in London’s St. James’s Palace. A reception in Buckingham Palace’s gardens was set to follow. But the wedding was postponed in mid-April, with a source telling People, that the couple had continued “wishes for a more low-key” celebration.

It was previously reported by Daily Mail‘s Rebecca English that the wedding would not be televised, unlike the ceremonies of Kate Middleton, Meghan Markle, and Princess Eugenie. Part of the speculation behind that decision is that Princess Beatrice would be given away by father Prince Andrew, who was asked to step back from royal duties after his controversial close relationship with Jeffrey Epstein.

One commonality among Princess Beatrice, Princess Eugenie, and Meghan Markle’s weddings is Windsor Castle. Eugenie tied the knot at St. George’s Chapel in Windsor Castle in October 2018. Markle and Prince Harry wed at the same location in May of that year. There’s no word on if Prince William, Kate Middleton or any of their three children made the guest list of 20 at Beatrice’s wedding, although it’s unlikely Prince Harry and Meghan Markle made the trek from the U.S. Recent reports indicate Markle’s mother Doria Ragland has been staying with the couple and their son Archie in Los Angeles.

One person who was likely to attend is Mazzi’s four-year-old son from a previous relationship. A source told People that the child was meant to be a pageboy in Beatrice and Mozzi’s wedding. “He is very much part of their life,” Beatrice’s friend told the outlet about her future stepson. “Beatrice has embraced the child as part of her life from the outset.”

The Buckingham Palace Launches Its Very Own Gin