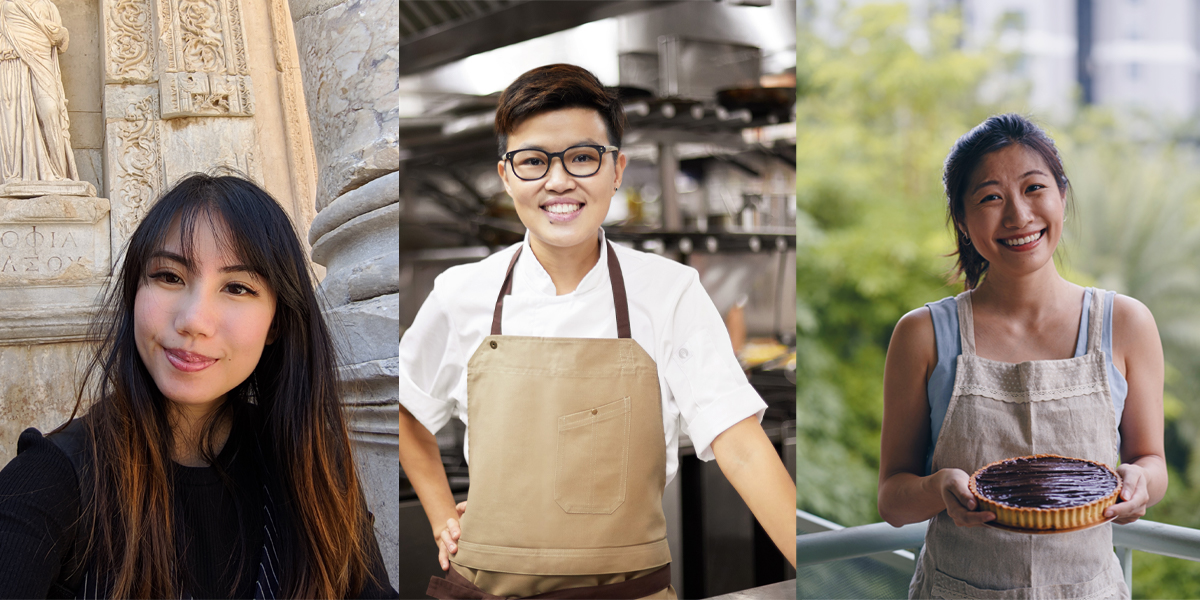 Few places around the world can boast of the culinary diversity and cultural contrasts Singapore has. For the most part, the food on the garden-city seems to possess the ability to grow on you. At a hawker center, the longer you stay, the more there is to see (and smell). Whether it be a vendor flipping stretched dough (or as we call it “prata”) or an elderly man skilfully pulling coffee from a “sock” strainer, there is something impeccable about the dishes we delight ourselves with on the sunny island since young.

As the nation reels to celebrate its 55th year since independence, we have seen several creatives, including a home-grown band who created a heart-warming National Day-themed song, commemorating National Day with creations on their own. Knowing that local cuisine has played a cardinal role in our lives, we have decided to ask three locally-based individuals—namely, a home baker, a creative and a chef—on the Singaporean cuisine and their unique, culinary creations that celebrate National Day.

What is the inspiration behind the Hainanese Chicken Burger?

It all started when we were planning our takeaway menu. I was thinking about how we could introduce something unique, but at the same time in line with #SupportLocal and #SGUnited. We’ve been actively working with more local suppliers and I thought it would be great to bring in some local inspiration.

My favourite Singaporean dish, Hainanese Chicken Rice, came to my mind—and why not?

What were some of the difficulties you encountered when trying to recreate Hainanese Chicken Rice into the burger?

To recreate something familiar and yet yield a different (but also enjoyable) taste was one of the biggest difficulties I encountered.

To me, the garlic and chilli sauce is the key. A simple taste of this sauce will immediately remind those who grew up eating Hainanese Chicken Rice of it.

I think this is a very interesting thing about how memory works. I came from Hong Kong, so if someone prepares the spring onions and soy sauce the way it is usually served with fish, I could immediately “taste” the fish as soon as I taste that sauce. So, we tried a few different recipes and even got the locals to try the sauce to see if it reminds them of the usual Hainanese Chicken Rice.

I love the hawker centres in Singapore. I think the food there is honest and balanced. I mean, why would we pair a refreshing chilli sauce with a gently poached chicken? It’s so that there is something to stimulate the taste buds and somehow this combination keeps you going.

Despite being the second most densely populated country in the world, Singapore feels very spacious and green. And very comfortable too. The view of Singapore from LeVeL33 is amazing and I would never get bored of it.

I will be working on both the eve and on National Day. LeVel33 will be serving a special dinner menu inspired by Singaporean flavours alongside with our National Day sharing platter. My Executive Sous Chef, Daniel, offered a lot of input with his ideas from childhood and I’m very excited to serve this elevated take on the flavours of a Singaporean childhood.

This is the toughest question ever!! Perhaps Chai Tow Kway (fried radish cake). Or Black Pepper Crab. Or Chili Crab. Or even Hainanese Chicken Rice… I can’t decide on one!

What is your inspiration behind the dish you are recreating?

Durian Pengat (a dessert with roots in Malay Cuisine)! I love the way the dessert incorporates coconut with durian, and I wanted to try my take on it while durians are still available, though the season is sadly coming to an end.

What were some difficulties you encountered while you were recreating this dish?

Procuring the right durians—ensuring they have good texture, with a nice balance of sweetness and bitterness.

Will you be offering this dish to your customers anytime soon?

Unfortunately not so soon, as the durian season is coming to an end. We’ll be revisiting this once the season begins again!

Home! I love travelling and experiencing different cultures, but cravings for local food hit hard after a while and homesickness ensues. And for good reason too! The choices are endless and good food is readily available throughout the island; what’s not to love?!

There was a massive wave of patriotism that I felt after the passing of late-minister mentor, Mr Lee Kuan Yew in 2015. It was a sad period for Singapore, but I distinctly remember witnessing “One United People” coming to life, where people from all walks of life displayed a completely unscripted love for each other and for our country. I felt so proud to be Singaporean.

Cosying up at home with my family enjoying delicious local food, and perhaps trying to catch a glimpse of the fireworks that are set to go off around the neighbourhood!

I can only choose one?? If I have to, then it’ll be one of the local breakfasts—the traditional breakfast, comprising kaya toast, eggs, and coffee, that you can find in kopitiam (coffee shops). I especially love the ones where they add a dollop of butter in your coffee!

When did you get acquainted with felt?

Earlier in March this year, just slightly before the Circuit Breaker (CB) happened. Things only picked up when McDonald’s shuttered during CB that I started making replicas of their fries and McNuggets. When more shops shuttered, I went on to make a few others relatable items including bubble tea, cup noodles and cookies. I remember when someone cracked the Famous Amos cookie recipe and it was trending, so I quickly hop on the bandwagon and sew my version. Famous Amos reposted it and that’s when my followers grew.

What is your inspiration behind the “dish” you are recreating?

Since National Day is just days away, I thought of making something that is uniquely Singaporean. There’s just something about drinking coffee from the traditional cup. Somehow, it’s just tastier that way. Which was why I decided to recreate the traditional breakfast set.

What is so special about the classic Singaporean breakfast?

I think it has this special ability to bond both the young and old together. Bring your grandparents and parents for breakfast at an old school coffee shop and conversations of nostalgic yesteryear will likely ensue.

What were some difficulties you encountered while you were recreating this “dish”?

Definitely the traditional coffee cup. The details of the flowers and assortment of leaves is not something felt can fully replicate. So, I had no choice but to simplify it into two flowers and a couple of leaves.

I think it’s something to be proud of. We have such diverse race and ethnicity in Singapore, each with their own unique dishes and stories to tell. After all, we’re not called the “food heaven” for nothing. People come here to try our local delights, so I’m nothing but proud of our food scene.

When we stepped into the Y2K (it goes to show how old I am). I remember I was still in primary school and people were talking about the millennium bug, or that computers would stop working, and how life would be in chaos. Life just went by in a flash since then and look where we are now! We’ve survived Y2K, SARS, H1N1, so hang in there! I’m sure we’ll get through Covid-19 too.

I’ll definitely be at home spending time with my family, watching the parade on TV, and making sure I catch the Singapore flag that’ll fly by. It’s a small affair, but nonetheless enjoyable. Maybe order in some local food. I don’t know if it will be satay or chilli crab. We’ll see!

Tired Of Planning Your Home Workout? Here Are 3 Routines Tailored By Local Gyms

A List Of Restaurants & Cafes To Support Throughout The Coronavirus Pandemic