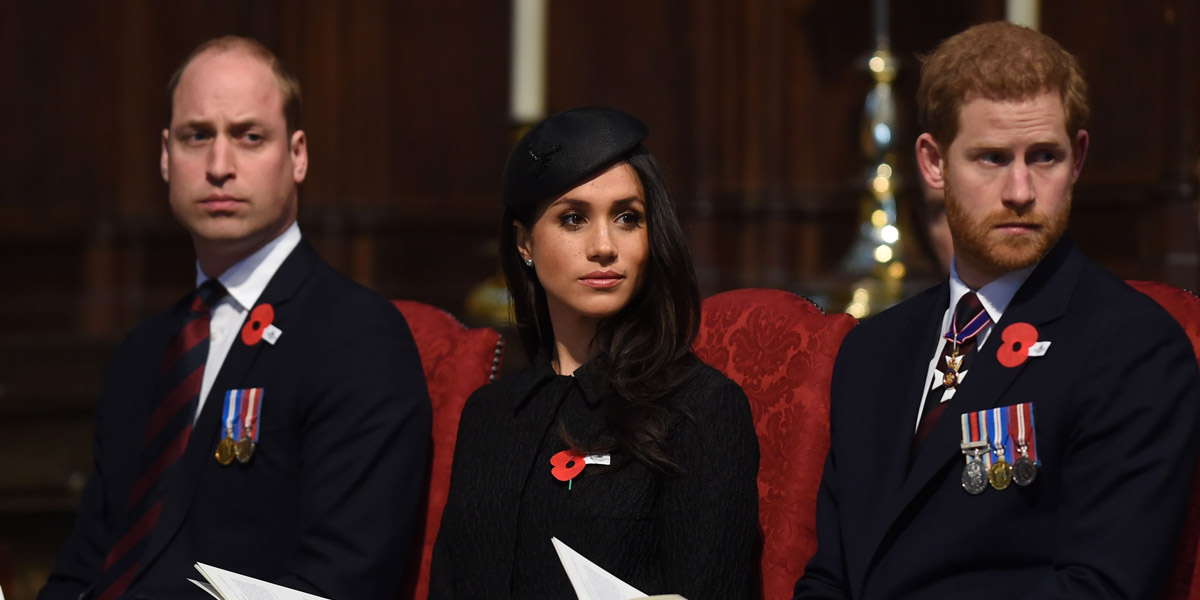 Much has been written about regarding Meghan Markle‘s distant relationship with her sister-in-law Kate Middleton. But the relationship between Meghan and Prince William—and William’s reaction to Prince Harry’s choice of bride—also explains some of the royal drama that led to Harry and Meghan deciding to step back from their senior royal family roles. Omid Scobie and Carolyn Durand’s new book Finding Freedom revealed some details about the two’s first meeting, William’s initial skepticism about Meghan, and the issues that ensued when Meghan and Harry were working with William and sharing his and Kate’s staff.

Here, the most revealing insights from the book.

Meghan first met William in early November 2016. She had “prepared herself for a grilling,” but he was very friendly.

Meghan visited William at his Kensington Palace home, Apartment 1A. Harry was with her.

Scobie and Durand wrote, “Meghan thought that William would no doubt want to know everything about her—and her intentions. She was self-aware enough to understand that the brothers were wary of women who were more interested in their titles than their well-being. And she couldn’t have come from a more different world than that of William, his wife, and most of their friends. Because of this, she had thought the entire meeting through, she told a friend. ‘She prepared herself for a grilling,’ a confidant said.”

It wasn’t that. “William first said to her, ‘I was looking forward to meeting the girl who has put that silly grin on my brother’s face,'” the authors wrote. Overall, Meghan and William got “along so well.”

William privately spoke to aides about his concerns that Harry’s relationship was moving too fast.

News of Harry and Meghan’s relationship broke in October 2016. They wouldn’t do their first event together until September 2017—when Meghan was secretly engaged to Harry. But during that initial period where Meghan and Harry’s dating became public—just months after the two began dating in July 2016—William spoke to staff about his worries that Harry was rushing things.

William publicly showed his support of Harry’s relationship, wanting to help protect Meghan from press attacks after he met her. When Harry released a statement in November 2016 about the harassment Meghan was facing from the British press, William released his own statement in support of Harry’s. The statement read, “The Duke of Cambridge absolutely understands the situation concerning privacy and supports the need for Prince Harry to support those closest to him.”

“William did worry about press intrusion and wanted his brother to feel supported on that issue,” the authors wrote of William’s reasoning.

But at the same time, Scobie and Durand report that William “privately voiced concerns to aides about the speed at which Harry’s relationship was developing with a Hollywood actress he hadn’t known for long.”

William eventually confronted Harry with his reservations, telling his brother to “take as much time as you need to get to know this girl.” Harry was not happy.

Meghan and William met a “handful of times,” Scobie and Durand reported, before William went to Harry with his concerns about Harry marrying her around April 2017.

A source told Durand and Scobie that some of William’s reservations came from him just not knowing Meghan well. “They’ve both developed a radar to detect that type of person [people taking advantage of them], but as William didn’t know a whole lot about Meghan, he just wanted to make sure that Harry wasn’t blindsided by lust,” the source said.

But after William told him to “‘take as much time as you need to get to know this girl,’ Harry was pissed off,” a source said. “Pissed off that his brother would ask such a thing. Some felt it was an overreaction. But then this totally sums them up as people—William, the clam and rational one, and Harry, who can’t help but take things far too personally.”

Another friend said that “Harry could see through William’s words. He was being a snob.” The brothers hardly spoke after William made his remarks. Kate and William stopped inviting Harry to come over as often, although both brothers distanced each other.

Ultimately, Harry didn’t care what William or anyone else in his family thought: “Nothing was going to get in the way of his happiness,” a source close to Harry and Meghan told the authors. “He knew Meghan was right for him.”

Meghan gave William a great gag gift during the royal Christmas at Sandringham in December 2017.

The royals give each other gag gifts as a tradition. Meghan gave one to William that was well-received: “At least one of her gifts was a huge hit—a spoon for William that had ‘cereal killer’ embossed on the shallow bowl end of the utensil,” Scobie and Durand wrote.

During that holiday, Meghan and Harry stayed with William and Kate at the Cambridges’ country home Anmer Hall during the royal Christmas festivities.

William felt bad for Meghan during the Thomas Markle wedding drama in May 2018.

In the days leading up to her wedding to Prince Harry, Meghan’s father Thomas Markle pulled out at the last minute and updated TMZ rather than Harry and Meghan directly about his status. Scobie and Durand wrote that “everyone, including William, felt sorry for Meghan. To witness her have her wedding day potentially ruined by her own father was heartbreaking.” William first met Meghan’s mother Doria Ragland at the wedding’s final rehearsal.

Ahead of the wedding, William did not attend Meghan’s baptism (Prince Charles did though). At the first reception, he introduced Meghan and Harry and announced Prince Charles’ toast to them. And at the couple’s more exclusive evening reception, William gave a speech and ultimately handed the mic off to his and Harry’s longtime friend from boarding school, Charlie van Straubenzee, to guarantee he’d get “sweet revenge” for Harry’s speech during his wedding to Kate, Scobie and Durand reported.

After the wedding, William and Kate never visited Meghan and Harry at their first country home in Oxfordshire.

William and Kate did not become much closer to Meghan and Harry after the wedding. The couple never visited Meghan and Harry in their Oxfordshire country home, where the Sussexes hosted friends and family during their first months as newlyweds. “The invite was there,” a source said.

Harry and William’s relationship hadn’t really improved much after William’s spring 2017 confrontation. Part of the reason he and Meghan opted to move to Frogmore Cottage in Windsor was to get space from William. “He [Harry] was at a point in his life where he was working with his brother, doing the foundation with his brother, and living by his brother. It was too much,” a source said.

Another source added that around that time generally, “there had been moments where he [Harry] felt people working with his brother had put things out there to make William look good, even if it meant throwing Harry under the bus.”

Harry and William’s relationship improved around Archie’s birth in May 2019, then became strained again by the end of the year and early 2020. Meghan and Harry began felt sidelined in their work and unsupported, leading to their decision to step back from their senior royal family roles in January 2020.

“He [Harry] feels that there were so many occasions when the institution and his family could have helped them, stood up for them, backed them up, and never did,” a source told Scobie and Durand.

And, perhaps giving the most telling public sign of his stance on Meghan, William ignored her at the Commonwealth Day service she attended with Harry. It was Harry and Meghan’s last event as working royals.

A Kensington Palace source told Durand and Scobie that William was upset that private family matters, including his strained relationship with Harry, had been made public. (Harry spoke about it during an interview for ITV’s documentary on his and Meghan’s South Africa trip.) “It’s not anger. It’s hurt,” the source said.

A friend of Harry’s told the two reporters that it will take time for William to get over Harry and Meghan stepping back from their royal family roles. Meghan and Harry, of course, now live in California with their son Archie. It’s unclear how much they speak to William or if they even talk regularly at all now.