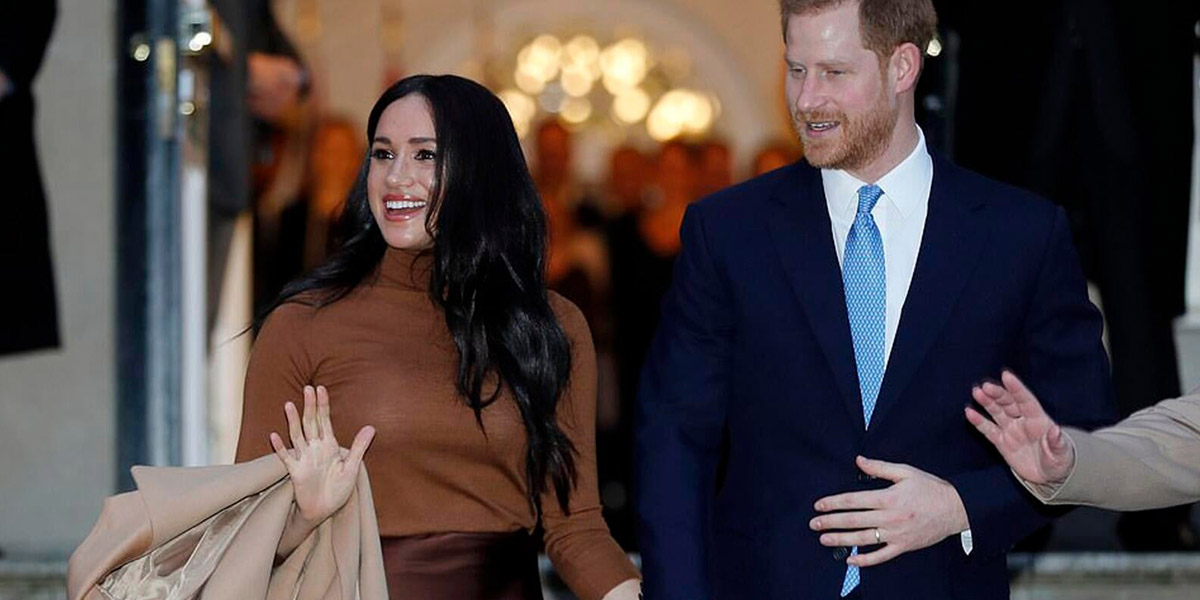 Last week, news broke that Meghan Markle and Prince Harry quietly moved to Montecito a few weeks ago. Now, the Duke and Duchess of Sussex have made their first joint appearance in their new house, joining a Zoom call for the Queen’s Commonwealth Trust, of which they still preside over as president (Harry) and vice president (Meghan). The Duke and Duchess joined a conversation about “the role of the online world as a force for good,” as QCT’s YouTube summed it up.

They were joined by Brighton Kaoma, founder of Agents of Change Foundation in Zambia; Hunter Johnson, founder of The Man Cave in Australia; Rosie Thomas, co-founder of Project Rockit in Australia; and, Vee Kativhu, Study & Empowerment YouTuber and founder of “Empowered by Vee.”

Meghan, dressed in a black and white sleeveless dress, and Harry, complementing her in a white button-up, sat in what appears to be a room from their estate in Santa Barbara, giving fans a little glimpse at their new place.

The couple spoke with the young leaders about their work and Meghan and Harry’s own thoughts on the role of social media and its potential harms. At one point toward the end, Harry commented that the future was in those young leaders’ hands, and Meghan laughingly told him not to count themselves out: “Stop, we’re not that old.”

Meghan, earlier in the discussion, more seriously discussed how the toxicity of negative online communities can really hurt people. “Everyone’s mental and emotional wellbeing are perhaps more fragile than ever before, certainly with COVID and our dependability on our devices right now in the absence of human interaction,” she started. “People are going online more than ever before to feel community. And unfortunately, which you rightly point out, when that community becomes divisive, when that community isn’t a pact for good but is a pact of people ganging up on one another, I think what’s challenging about that is if people don’t feel an escape, and it can probably feel really lonely in that space.”

She added later that “[a healthy online community] is not an echo chamber. It’s not everyone being in agreement all the time but being able to have a healthy discourse, being able to disagree. That is so key is not trying to build utopia. It’s trying to build a healthy community so people feel safe or heard and perhaps walk away with a different perspective that they hadn’t encountered or experienced or thought at the onset but that they have that interaction, that’s what’s so important. That’s what this life is all about, learning everyday, but if you don’t feel you’re in a space that is safe enough to express those thoughts and to be heard and supported in a way that is actually beneficial for us as a community, then where does that leave us?”

“This isn’t for lack of desire that it’s not out there,” she continued. “This is for lack of it being built. And so you guys out there doing the work and building what people really need is really everything.”

You can watch their full discussion below: