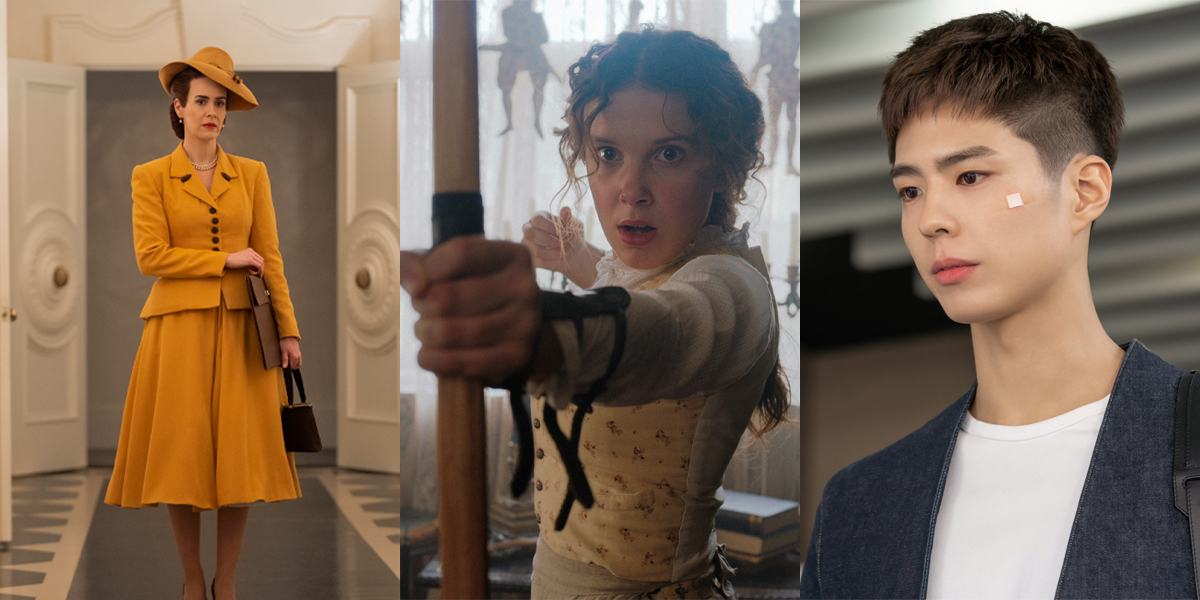 Considering the star-studded ensemble who will be appearing Netflix and Apple TV+, September 2020 is lining up to be a huge month for all of us.

From the prequel to Ryan Murphy’s “One Flew Over the Cuckoo’s Nest”, starring Emmy-winner Sarah Paulson, “Ratched” to a film on Sherlock Holmes’s younger sister, which casts Millie Bobby Brown, Henry Cavill and Helena Boham-Carter, an Israeli espionage film to the latest season of Chef’s Table, we recommend clearing your schedule to binge on the new releases on Netflix and Apple TV+.

1. Missing: The Other Side

With reports noting the sharp increase in ratings for its second episode (the drama releases weekly and at the time of writing, only two episodes were released), Missing: The Other Side is showing a lot of promise. The new mystery-fantasy drama sees Kim Wook (played by Ko Soo), a smooth talker and con artist, arriving at a Duon Village, where spirits of the missing gather, and embarking on a quest to unravel the truth behind the disappearances. He is soon joined by a mysterious man (played by Heo Jun-Ho), a white hat hacker (played by Ahn So-Hee), and an elite detective (played by Ha Soon).

Missing: The Other Side is available on Viu now.

Today, it is common for producers and scriptwriters to adopt the time travelling narrative to lend a certain sense of thrill or suspense in shows or films. In Alice, Park Jin-Gyeom (played by Joo Won) is a detective who discovered the existence of time travellers, who arrive at the present through a space called “Alice”. As he attempts to prevent daily catastrophes from happening through “Alice”, he meets the late-physicist Yoon Tae-Yi (played by Kim Hee-Seon) who supposedly was Park’s lover and holds the key to time travelling.

Alice is available on Viu now.

It’s been close to five years since the release of Chef’s Table on Netflix. Since then, there have been six seasons of masterful culinary storytelling that document the untold tales of chefs (across the world, no less) and their specialty cuisines. This year, the critically-acclaimed and Emmy-nominated series returns to Netflix and sheds light on the smoky, juicy and tantalizing world of barbeque. From an 85-year-old grandmother who still shovels the coals at the Texas restaurant to a traditional Mayan chef, I’m certain the series is just about to get better. All I ask, you don’t watch with a half-empty stomach.

Chef’s Table: BBQ will be available on Netflix from September 2, 2020.

The anticipated South Korean drama sees the dashing Park Bo-Gum acting alongside with Parasite’s Park So-Dam and Welcome to Waikiki 2‘s Byeon Woo-Seok. In Record of Youth, three ambitious youths—two models and an aspiring makeup artist—strives to make it big in the fashion industry. In between grappling with the struggles in their career and their love life, the trio sees themselves confiding with one another and working hard to achieve their dreams without losing hope. This would be Park Bo-Gum’s last big gig before heading to mandatory military enlistment at the end of the month.

Record of Youth will be available on Netflix from September 7, 2020.

There have been plenty of thrilling zombie films in recent years. Somehow, the South Korean ones always get to me in suspense, thrill, and if I must add, poignance (Hint: Train to Busan). This year, a brand new zombie thriller, #Alive, is arriving on Netflix which casts Memories of Alhambra’s Park Shin-Hye and Chicago Typewriter’s Yoo Ah-In. The story centers around a new virus outbreak that seems to turn people into man-eating zombies. Somehow, two survivors, Joon-Woo (played by Yoo) and Yoo-Bin (played by Park) are the sole survivors. With little resources, no cellular data, and no wifi, the duo finds themselves trapped and separated apart from each other across two residential apartments. The four-minute long trailer shows a lot of promise, and you can be sure I will be there to catch it.

#Alive will be available on Netflix from September 8, 2020.

6. The Devil All The Time

Based on the novel of the same name, The Devil All The Time is an American psychological thriller that casts teenage heartthrobs Tom Holland and Robert Pattinson and Pennywise the Dancing Clown from It’s Bill Skarsgård. Produced by Jake Gyllenhaal (who has worked with Holland in Spider-Man: Far From Home as the film’s antagonist and Peter Parker’s nemesis Mysterio), the film features sinister, disparate characters—an unholy preacher (played by Pattinson), a husband and wife who are murderers (played by Jason Clarke and Riley Keough), a disturbed war veteran (played by Skarsgård)—in post-World War II in Ohio and West Virginia. All of whom converge around uoung Arvin Russell (played by Holland) and he stands alone against the evil that threatens him and his family.

The Devil All The Time will be available on Netflix on September 16, 2020.

With travel being physically impossible now, this documentary series might be an interesting binge to sate your wanderlust desires. In 2019, two best friends, Ewan McGregor and Charley Boorman, embarked on a motorcycle journey that covered 13,000 miles over 100 days through 16 border countries. From Argentina to Mexico, the duo visited 13 countries and journeyed through the underexposed landscapes of South and Central America.

The dramatic prequel to One Flew Over the Cuckoo’s Nest, Ratched tells the origin of the world’s most iconic (villainous) character Nurse Ratched. Played by Sarah Paulson and produced from the creators of American Horror Story, the premise of the series explores Mildred Ratched employment at a world’s leading psychiatric hospital. As she begins to infiltrate the mental health care system and those within it, she discovers the asylum’s unsettling experimentations on the human minds and becomes slowly acquainted with the darkness that smolders within her.

This is not the first time Paulson has collaborated with American screenwriter Ryan Murphy. Her previous collaborations saw the actress landing seven Emmy nominations and a win in “American Crime Story: The People v. O.J. Simpson”. If anything, I am excited to see what the duo has got to offer in this psychological horror drama series.

Ratched will be available on Netflix on September 18, 2020.

The official trailer was released on 25 August 2020, and as the time of this writing (which is one day later), it has since garnered close to 3 million views. There is a lot of hype going on about this film and considering how the film stars Millie Bobby Brown, Henry Cavill, Sam Claflin and Helena Boham-Carter, all of whom are A-listers, the hype is well-justified. The plot follows Enola Holmes (played by Brown), Sherlock (played by Cavill) & Mycroft (Sam Claflin) Holmes’s teenage sister, setting off on a journey to find her missing mother (played by Boham-Carter) and along the way, she discovers a conspiracy that sets her in danger.

Enola Holmes will be available on Netflix from September 23, 2020.

This new romance K-drama follows unconventional storyline. A high school nurse, Eun-young (played by Jung Yu-Mi), possesses a super power that allows her to see monsters as jelly figures. While most of these jelly figures are cute to look at and comes in all shapes and sizes, some may be contaminated to become evil and harm humankind. And for the longest of time, Eun-young has been secretly defending mankind against the evil jellies (sounds cute, right?). But when the high school is suddenly threatened, she finds herself teaming up with In-pyo (played by Nam Joo-Hyuk) who happens to be the handsome heir to the school and also possess a super power too, to combat against dangerous … jellies.

The School Nurse Files will be available on Netflix from September 25, 2020.

In this new espionage thriller, Tehran tells the tale of a Mossad agent (played by young Israeli actress Niv Sultan) going undercover on a dangerous mission in Iran’s capital, Tehran, which also happens to be the place of her birth. And as it turns out, the mission endangers not only her nor the Middle East, it threatens the world. From “Fauda” writer Moshe Zonder, Tehran will premiere on Apple TV+ in late September.