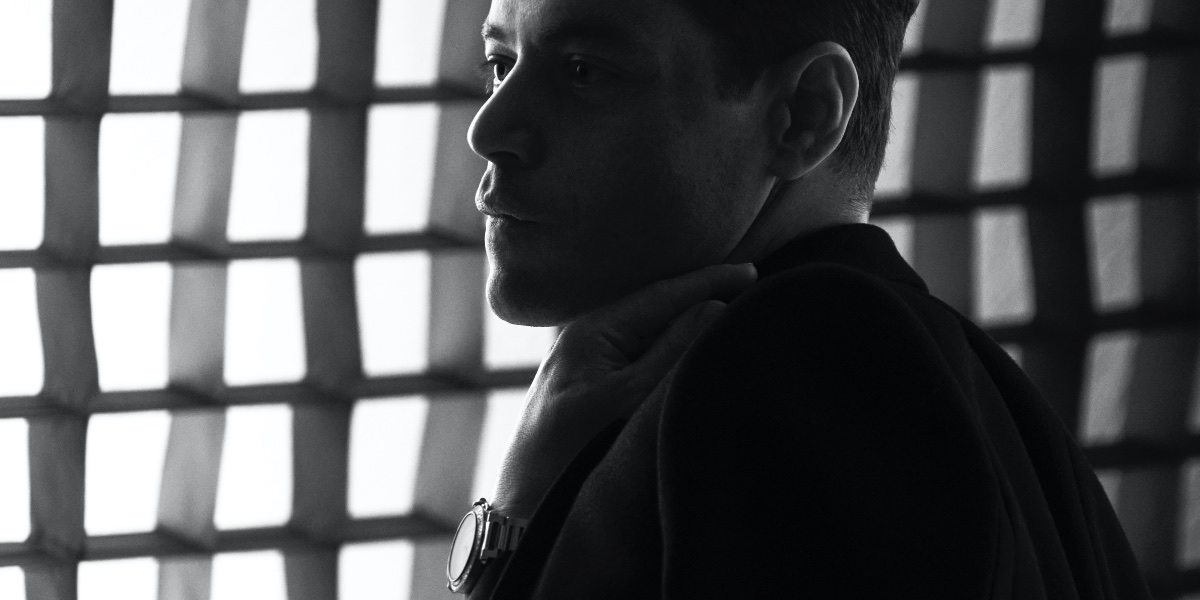 “It’s a kind of magic” Freddie Mercury, aka Rami Malek, is calling me via Zoom. Unfortunately, it’s a call with only sound on — no video. But I can imagine his friendly face with his big expressive eyes on the other side of the screen. Elliot Alderson, the Hacker in Mr Robot, would have certainly managed to activate the image. Has he just woken up? Is he still in his pyjamas or in a bathrobe? Is he quarantining with Lucy Boynton, his on-screen partner in Bohemian Rhapsody and in real life? Malek is discretion incarnate, barely featuring on social media, preferring to play it “vintage”. He’s even been dubbed “the anti-celebrity” by journalists.

Interviewing the actor is a revelation in itself. He speaks cautiously, leaving big pauses between each question. He reflects. For this great reader, who also likes to write letters in fountain pen, each word has meaning. Much like each of his carefully chosen roles, the process is carried out without haste. Since 2004, Malek has taken on characters without once losing himself.

It was his micro role in Gilmore that got him started. Then he appeared in an episode of Medium and two of Over There, before a regular role in The War at Home revealed his comic talent. Malek made his feature film debut as Pharaoh Ahkmenrah in the Night at the Museum trilogy, before audiences saw him again in Twilight. But what made directors sit up and take notice of him was The Pacific, a TV series that premiered in 2010 as a companion piece to the smash hit Band of Brothers. He was later cast by Paul Thomas Anderson for The Master. In 2015, he played the lead role in the critically acclaimed series Mr Robot, created by Sam Esmail and soon after got his first starring role in a film, Buster’s Mal Heart. More recently he co-stared with Charlie Hunnam in a remake of Papillon, before breaking into the big leagues with his stunning award-winning portrayal of Freddie Mercury in Bohemian Rhapsody.

He will next be seen on the big screen as the villain in the highly anticipated 25th James Bond opus No Time to Die, alongside Lea Seydoux, Lashana Lynch and of course Daniel Craig, who reprises the role for the last time.

Open-minded, Malek is a man of action and commitment who did not hesitate to participate in a Women’s March in Paris nor to defend diversity: “I never thought that I could possibly play Freddie Mercury until I realised his name was Farrokh Bulsara and that was the most powerful message that was sent to me from the beginning,” confesses the Oscar-winning actor.

For the launch of their new Pasha watch, Cartier brought together a community of unique personalities who are changing the codes of success by forging exceptional new and diverse paths of creativity. And Rami Malek is the man of the hour, without a doubt.

How are you spending your days in lockdown?

Finding new ways to entertain myself [smile]. I was smart to get a bike almost immediately, in the very beginning when no one was on the road. It was a unique experience to see all of London on a private ride. And exercise is always good for our health and our mind, especially in times like these.

A few! I’ve just always been worried, in this time, of where people were, so I didn’t know if I was going to reach them. But more reading than writing actually. I do gravitate toward non-fiction, perhaps that has a lot to do with the stories I get to create as an actor. I’ve been drawing, I’ve taken up a bit of painting, so I’m working on something that’s taken me quite some time, but I’m excited to hopefully hang it up one of these days.

Do you think that the covid pandemic will modify our world?

Absolutely! If anything it just forces us to really respect one another more than we do, really listen to each other, look after one another. Hopefully, we come out of this more unified and stronger, because difficult situations like this can often galvanise us. I hope that’s the case.

How do you see the future of the movie industry, which is currently suffering greatly?

I feel confident in our ability to adapt and re-adapt, I personally crave the cinema experience and I look forward to that being a staple in life again, but I appreciate that we have to take certain steps and actions before that’s a possibility. Things have been put on hold in our industry including the worldwide release of the new James Bond movie which was previously due in April, but that of course pales in comparison to other things going on in the world.

As you expressed in your Oscars acceptance speech for Bohemian Rhapsody, we’re longing for stories about minorities, be it race or sexuality, to challenge us, and open our minds. Do you feel that strides will be made in the industry?

I do, but I hope the momentum picks up. It’s not a new conversation but it’s one that is perhaps gaining volume and better traction now, so I’m hopeful that it continues to do so and is more efficiently put into practice.

Would you be tempted to perform in a biopic again?

I’m very much still wrapping my head around, and savouring the experience of playing Freddie so I’ll have to get back to you on the biopic question.

You are the villain in the next James Bond film, No Time to Die. How was it making a bond film?

I really did enjoy it. There’s something quite special about stepping onto that 007 set, and seeing the production design on a scale like no other. It’s one of those moments I look back on, and it brings a smile to my face. There are things that you never think will happen to you. You just don’t think that you’re going to [have] opportunities like that, standing with James Bond, about to have the film rolling.

Did you grow up watching James Bond? Who is your favourite bond?

I grew up watching all of them. I love the early ones with Sean Connery, it was a time I got to spend getting an education on film as a kid, sitting with my father, and these [Bond films] happened to be part of an education that I cherish. I have to say that Daniel [Craig] is my favourite Bond though.

You once explained that you “like characters with a moral predicament that they refuse to confront”. Do you feel you found this same complexity in a james bond villain?

Safin is a very different character to any I’ve played before so this is an interesting analysis to try and apply to him … I think he’s guided by a certain set of self-prescribed morals but I don’t think he by any means views these as a predicament. As far as he’s concerned, there’s not much that could get in the way of his intention of carrying out his plans … enter Bond.

Do you have a future dream role in mind?

I do actually, and I am keeping that close to the chest as they say. Hopefully that comes to fruition.

You are one of the new ambassadors for Pasha de Cartier. What does it mean for you?

Cartier is the epitome of elegance and sophistication and I am thrilled to be an ambassador, especially for this particularly unique Pasha watch. I think it very much suits me and it feels like a natural relationship.

What does jewellery mean to you?

It is a great form of decoration and self-expression. There’s something very special about having a nice watch around your wrist.

Are you more into steel or gold?

There is a time and place for each. And I enjoy being able to have a variety of watches for particular occasions. My Pasha watch is in steel, with the blue cabochon. I think everybody is going to like it! It’s absolutely stunning and it’s definitely an eye-catcher and a stand-out, but it’s still very elegant and sophisticated. And it has all the hallmarks of that really special Cartier craftsmanship.

Do you remember your first watch?

I used to borrow all my father’s watches, so I don’t actually remember, I’d always be wearing his. He definitely influenced my style, there’s no doubt about it, but actually when thinking back to that time, I’m also struck by my mother’s elegance. That, and her determination, are attributes I’ve always been influenced by and try to emulate.

You belong to the Pasha de Cartier tribe now, alongside Willow Smith, Maisie Williams, Troye Sivan and Jackson Wang, is this sense of belonging to a community important to you?

Extraordinarily so! You know communities, for me, they symbolise appreciation of one another. To see such individuals who have strived to achieve something special in their lives, and push boundaries — it is a really cool thing to be a part of. I’m proud to be associated with this particular group. I think they are uniquely talented and special – not just as artists but as entrepreneurs who are changing the way that we think about what we are capable of as artists.

You have a twin brother, Sami. Does having an identical twin make you feel more complete as a person?

I wouldn’t say more complete as a person as we are two very separate, different individuals, and were always raised as such, but I’m really aware of how lucky I am to have grown up with a constant ally and partner in crime. That goes for my sister as well, Yasmine [who is a medical doctor].

You are turning 40 soon, how do you feel about it?

I feel good. I feel great about it. I don’t spend much time thinking about age, yours, mine, anybody’s…it’s a gift to be alive. Now, I’m just obsessed with trying to get enough sleep. That’s one thing I always feel I am lacking. I read a good book recently called Why We Sleep and it made so much sense to me, as it is for our psychology, our health, and our wellbeing. That’s probably the best beauty advice you can get: “Go to bed!”

You are quite absent on social media with only four posts on your Instagram. Why?

It’s something that doesn’t feel instinctual for me, and I never want anything that I do to feel forced. If I naturally gravitated towards it, that would be different. I can see both the profound advantages and disadvantages of it. I am just not someone who would benefit from engaging in that way. I don’t want to offend anyone who appreciates it. I can totally understand it.

I don’t and I mean, there’s positive aspects and negative aspects to it, and if that’s where you find your people, that’s excellent. There’s just some divisiveness out there that can be difficult for some and so, I’m of two minds about it.

What is your relationship with time?

It’s more of an appreciation of the past, while always making sure to look forward. A great reminder.

An Exclusive Tour Into Chaumet’s Headquarters At Place Vendôme, Paris

A Singular Vision: Three Trailblazing Women On Carving A Path Towards Their Passion