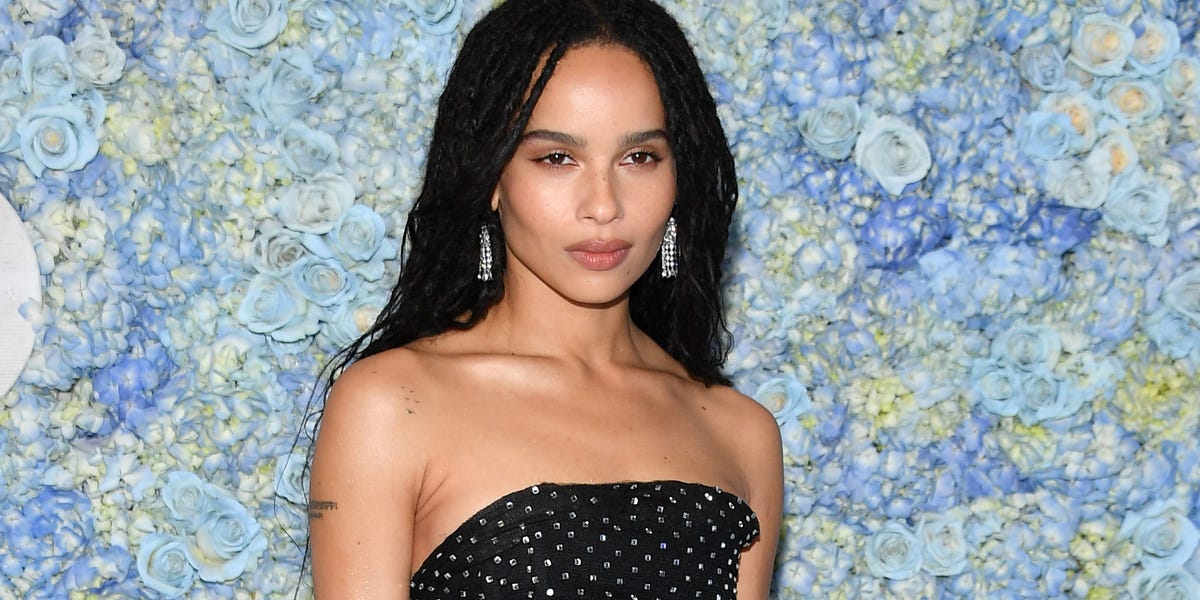 Apologies to Anne Hathaway, Michelle Pfeiffer, and Halle Berry—the title of chicest Catwoman might just belong to Zoë Kravitz. Fans got their first look at the actress in the role of Selina Kyle on Monday with a photo from The Batman‘s U.K. set. It’s the only time Kravitz has been publicly spotted during production, which resumed in September after star Robert Pattinson recovered from COVID-19.

In the photo, Kravitz sports a sleek asymmetrical bob, fishnet tights, and a matching leather ensemble. Her trench coat, headpiece, and button-up boots all complement the leather look. Kravitz appears to be walking down the steps of a courthouse or government building, alongside two men in suits. Batman hive, your time to thoroughly dissect this image begins now.

Another picture shows Kravitz locking arms with co-star John Turturro, who plays the villainous Carmine Falcone in the film.

And a new look at Pattinson as Bruce Wayne shows the actor looking stern in a wool coat and dark suit.

The first look arrives nearly a year to the day after Kravitz’s casting was confirmed by director Matt Reeves. He tweeted a gif of the actress, which he similarly did to acknowledge Pattinson’s casting as Batman, Jeffrey Wright as Commissioner Gordon, Andy Serkis as Alfred, Colin Farrell as the Penguin, and Peter Sarsgaard in an unspecified role.

This isn’t Kravitz’s first brush with the role of Catwoman. She voiced the clawed character in 2017’s The Lego Batman Movie. In 2015, Kravitz told Nylon she was denied the opportunity to audition for 2012’s The Dark Knight Rises because she was seen as too “urban.”

The Batman has seen several date changes since filming on the movie was first delayed in March. Originally scheduled for a June 2021 release date, the film was moved to October 2021 before finding its current release date: March 4, 2022. Given this fabulous first photo, we’ll be counting down the days.