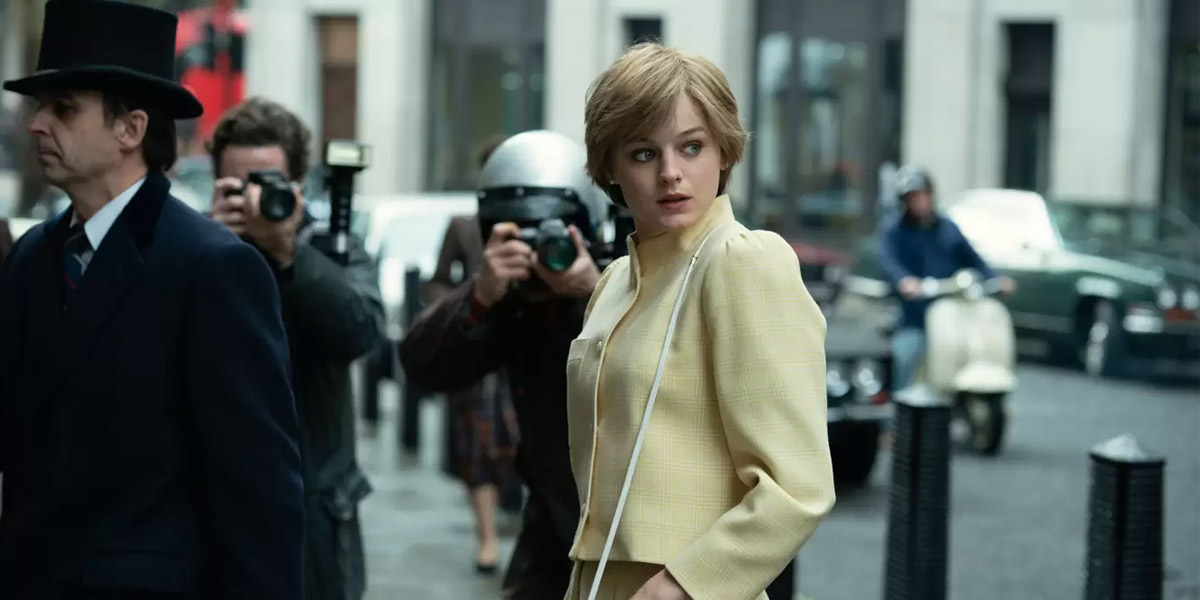 Stepping into the shoes of Princess Diana was no simple process, according to actress Emma Corrin. Ahead of The Crown‘s season 4 debut, she’s spoken about the work it entailed to portray the late royal, from watching the documentary Diana: In Her Own Words “about a hundred times” to meeting with Diana’s private secretary Patrick Jephson. Another key element in Corrin’s research—nailing Lady Di’s accent.

“I love the Diana we meet in the beginning for so many reasons….this is the Diana no one knows about,” she told Variety. “We all know what she was like when she was older, there’s so much—too much—footage of her. So I was really charmed by getting to know younger Diana.” As for the word that helped Corrin capture Diana’s drawl? “Mine was ‘all right,’ the actress revealed, adding, “I just love her voice so much. I really miss it. She goes down at the end of everything she says, which makes everything she says sound quite sad.”

Prior to Corrin’s study of Diana’s speech patterns, she had to secure the high-profile role. She got the part while reading lines for actors auditioning to play Camilla Parker Bowles. (Emerald Fennell plays her in seasons 3 and 4.) One day during auditions, director Benjamin Caron and producer Suzanne Mackie debated how to tell Corrin she would play Diana. She recalled, “We were in a very stately home, we read the scene through, and then Ben turned to Suzanne and said, ‘Can I tell her now?’ And Suzanne was like, ‘Let’s maybe read it through once more.’ So we read it through once more and then Ben was like, ‘Will you be our Diana?’”

Corrin also revealed that Josh O’Connor, who plays Prince Charles, was there for the major moment. “I think he actually has a better memory of it than I do because my brain stopped functioning,” Corrin joked to Variety. “I have a complete blackout in memory from when they offered me the role to when I was in the car calling my family on the way home.” O’Connor chimed in, “It was like X Factor where they get the bands together and they say, ‘Guys we’ve got some bad news,’ and it cuts to them being like, [sighs], ‘The other lot are going home, you’re through!’ It was that dramatic.”

As for how Corrin closed her chapter playing Diana, she said there was no finality to it given the way the pandemic abruptly ended filming. “It was strange because we didn’t have any closure because of COVID. I was filming one day to the next and then I was in lockdown,” Corrin said. “In terms of someone else taking over, my friend put it really well the other day. She said it must feel like your ex is moving on, which is exactly what it feels like. It’s like, ‘Oh that’s nice, I hope they’re happy.’ But you do have to let go I guess.”

Elizabeth Debicki will play Princess Diana in seasons 5 and 6 of the show, while Dominic West is in talks to play Prince Charles. “The charm and brilliance of the The Crown is that you see all these different actors play their versions of these people, it’s so much more interesting than seeing one person do it, than seeing one person’s interpretation,” Corrin explained. Her iteration of Diana will hit Netflix on November 15.

The Crown Season 5: Everything We Know About The Final Season