by Savannah Walsh a& Madison Feller 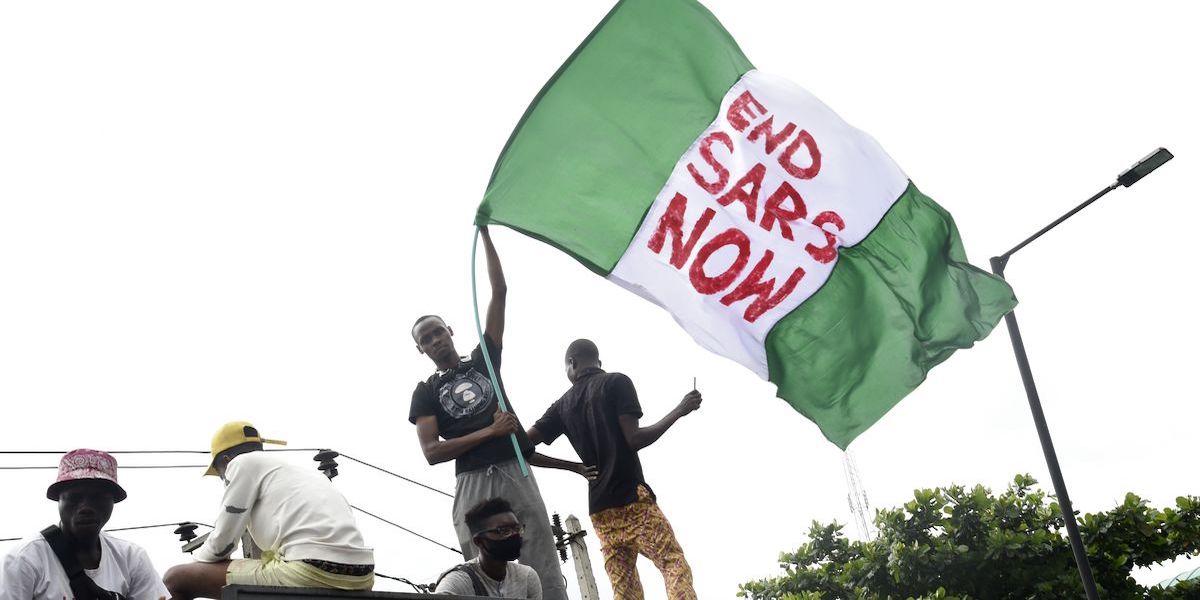 Amid global protests against police brutality and discriminatory profiling, the #EndSARS movement in Nigeria has gained international attention. Thousands in the country are protesting against the Special Anti-Robbery Squad (SARS), a special police unit that has a history of using violence and intimidation against the youth population.

In June 2020, Amnesty International reported at least 82 instances of torture and extrajudicial killings via SARS between January 2017 and May 2020. Like protests in the U.S. against police brutality, demonstrations in Nigeria have been met with tear gas and reported gunfire.

The Daily Show host Trevor Noah explained the movement on an episode of his late night series this week. “I know that some of you might be saying right now. ‘Well, if these Nigerians would just obey the law, then they wouldn’t have to worry about the SARS police.’ Well, unfortunately, obeying the law doesn’t help when just existing is considered a crime,” Noah said. Nigerian citizens said that SARS would profile young people for simply owning flashy cars, iPhones, or having tattoos and dreads.

As tensions rise in the country, everyone from presidential candidate Joe Biden to Beyoncé is denouncing the violence and the Nigerian government’s response to protests. “This one we know falls solely on us. It’s our fight,” singer Omah Lay told Teen Vogue about the role of young Nigerian people in the #EndSARS movement. “The police hardly harass the elderly, but once they sight a young man and you maybe have dreads, piercings, or tattoos, you are automatically a ‘yahoo boy.’ They’d stop at nothing.”

Ahead, what to know about SARS, the force Nigerian officials are replacing it with, and how you can help.

SARS stands for the Special Anti-Robbery Squad. The New York Times reports that SARS began in 1992 in order to tackle violent crime in Lagos; officers travelled in unmarked buses and often did not wear uniforms or name tags. The outlet explains:

“The anonymity was considered vital for taking on the gangs that openly terrorised Lagos at the time. But as the police unit grew, establishing itself throughout the country, its faceless nature opened the door to abuse, making it difficult to identify and report rogue officers and emboldening them to act with impunity, critics say.

The SARS unit has been accused of targeting young people who appear well-dressed, shaking them down for money, and torturing and abusing and even killing those who resist. Amnesty International says it documented more than 82 cases of abuse and extrajudicial killings by SARS officers from January 2017 to this May.”

According to TIME, protests against police brutality began in Nigeria in early October after a video showed officers, who were thought to be SARS, allegedly killing a young man in Nigeria’s Delta State. (Nigerian authorities have denied the reports.) Young people, who say they are often targeted by the police, are propelling most of the nationwide demonstrations calling to #EndSARS.

Witnesses told CNN that on Tuesday multiple peaceful protestors were shot by soldiers. According to the BBC, “witnesses said up to 12 people were killed and others wounded when soldiers opened fire.”

How has the Nigerian leadership responded?

On October 11th, the Inspector General of Police Mohammed Adamu announced SARS would be disbanded (though this has been announced multiple times in the past), but that officers would be redeployed to other units. It’s also been reported that another unit has been organised to replace SARS. This has led to another hashtag, #EndSwat, referring to the new Special Weapons and Tactics team. CNN reports that the International Committee of the Red Cross will help train SWAT and former SARS officers are not eligible to join. The government has also extended curfews outside of Lagos to areas around Nigeria.

Protestors are also asking for more than just dissolution, coming forward with five core demands: the immediate release of arrested protestors; justice for deceased victims of police brutality and compensation for their families; an independent body to oversee the investigation and prosecution of police misconduct reports; evaluation and retraining of all disbanded SARS officers before they can be redeployed; and an increase in police salary.

Who else is supporting the movement?

As news of the protests have gained traction, a number of celebrities and politicians have shared their support:

“I urge President Buhari and the Nigerian military to cease the violent crackdown on protesters in Nigeria, which has already resulted in several deaths. My heart goes out to all those who have lost a loved one in the violence. The United States must stand with Nigerians who are peacefully demonstrating for police reform and seeking an end to corruption in their democracy. I encourage the government to engage in a good-faith dialogue with civil society to address these long-standing grievances and work together for a more just and inclusive Nigeria.”

What you can do right now: