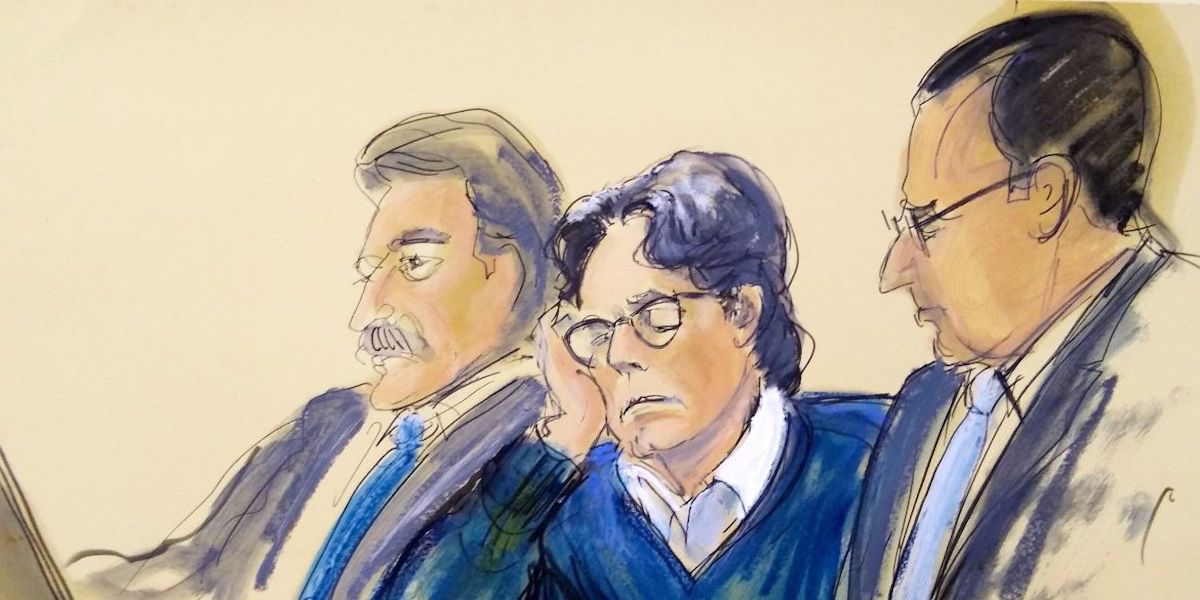 More than a year after Keith Raniere was convicted on federal sex crimes and other charges, the NXIVM cult leader was sentenced to life in prison.

Detailed information about the inner workings of his upstate New York’s so-called “sex cult” were revealed over the last several years as federal prosecutors pursued cases against its highest-ranking members, including Raniere, who was found guilty of sex trafficking and forced labour charges in June 2019.

An investigative journalist from the Times Union of Albany first exposed NXIVM in a series of features in 2012 questioning its strange sex practices. However, authorities didn’t make any arrests until a 2017 exposé in The New York Times brought to light how members were allegedly enslaved, branded, and subjected to harsh corporal punishment. NXIVM is the focus of a new HBO docuseries The Vow. One of the group’s most faithful former members, India Oxenberg, executive produced a separate series on Starz recounting the seven years she spent in NXIVM. In an exclusive interview with ELLE.com, found here, she revealed that she branded with Raniere’s initials — which she later had covered up with a tattoo.

In March 2018, Raniere—described by Assistant U.S. Attorney Tanya Hajjar as a “crime boss” who used “shame and humiliation as ways to bring people down”—was arrested and charged with sex trafficking after a standoff with Mexican federal agents in Puerto Vallarta. In June 2019, he was found guilty of federal sex trafficking, extortion, obstruction, and racketeering charges.

His 120-year prison sentence follows an interview on NBC’s Dateline last week in which Raniere maintained his claim of innocence.

Several others, including an heiress to the Seagram liquor fortune, Hollywood actress Allison Mack, and a former psychiatric nurse, were also charged in connection to NXIVM.

Clare Bronfman, the Seagram’s heiress who was accused of recruiting individuals into NXIVM-affiliated groups and seeking visas for them based on false representations, was sentenced to 81 months in prison earlier this month for conspiracy to conceal and harbour aliens for financial gain and fraudulent use of personal identification information, according to the U.S. Attorney’s Office. The court also imposed a fine of $500,000 and restitution to be paid to a victim in the amount of $96,605.

Prosecutors claim NXIVM was an illegal pyramid scheme, which Raniere used to recruit women and force them to have sex with him. At his trial in May 2019, jurors heard a seemingly endless slew of lurid testimony, including detailed descriptions of how he had sex with underaged girls and forced three women he impregnated to get abortions. It took just five hours of deliberation to find him guilty of sex trafficking, sex trafficking conspiracy, racketeering, and conspiracy to commit forced labour.

Here are all of the harrowing, and at times disturbing, allegations that have emerged about NXIVM’s sinister sex practices.

Actress Allison Mack was in a secret sect of the organization called a “master-slave” sex ring by prosecutors and which allegedly branded women.

According to court filings obtained by CBS, Raniere, who went by the codename “Vanguard,” created a sorority within NXIVM called “DOS,” an acronym for a Latin phrase meaning “Lord/Master of the Obedient Female Companions.” The DOS had female “slaves” owned by “masters,” according to the filings. Smallville actress Allison Mack was allegedly second in command of the group, following Raniere.

Intimate details about DOS surfaced in a 2018 New York Times Magazine article. As a process of initiation, female members were allegedly branded near their pelvic bone with Raniere and Mack’s initials. Surgical masks were reportedly distributed to help with the scent of burning flesh.

According to the piece, an estimated 150 women joined DOS. During Raniere’s trial, his lawyers called the DOS “strong medicine” that was not for everyone, according to The New York Times, but that it was helpful to certain people.

On April 8, 2019, Mack pleaded guilty to racketeering and racketeering conspiracy charges related to NXIVM. As part of her guilty plea, she admitted to state law extortion and forced labour. In a statement, the U.S. attorney for the Eastern District of New York Richard P. Donoghue said Mack recruited for NXIVM.

“Ms. Mack was one of the top members of a highly organised scheme which was designed to provide sex to [Raniere],” assistant US attorney Moira Penza said in court, according to The Guardian. “Under the guise of female empowerment, she starved women until they fit her co-defendant’s sexual feminine ideal.”

One member claimed Mack told her that having sex with Raniere would “get rid of” her sexual abuse trauma.

A 29-year-old NXIVM member identified only as “Jay” during testimony at Federal District Court in Brooklyn at Raniere’s trial, said she joined the organization under the guise that it was a women’s empowerment group. According to Buzzfeed, Jay said Mack told her that she needed to seduce and have sex with Raniere to, “help you get rid of all your sexual abuse trauma.” Then, she was to let him to take a nude photo of her.

Jay, who said she was sexually abused by her uncle when she was 12 years old, was upset that Mack tried to use her trauma against her. “Internally, I was just like, You fucking bitch,” she testified, according to Buzzfeed. Then, she realised she “needed to get the fuck out of there.”

Raniere allegedly groomed a 15-year-old girl who went on to become his first “slave.”

Raniere faced various charges related to his involvement with NXIVM, including conspiracy involving acts of child sexual exploitation and possession of child pornography. Federal prosecutors claimed to have evidence that Raniere engaged in a sexual relationship with a 15-year-old girl who went on to become his first slave. She allegedly sent images to him, “constituting child pornography.”

His lawyers tried to have the evidence barred from the trial, but a judge ruled that, “the images are ‘evidence regarding the formation and structure of DOS,’ which makes them evidence of Subject Offenses (sex trafficking, forced labour, and extortion) occurring in 2015 or later,” according to The New York Post.

According to the Albany Times Union, jurors at Raniere’s trial were shown sexually explicit images of the 15-year-old girl he allegedly had a relationship with.

The female sex “slaves” allegedly arranged themselves naked in front of Raniere while he lectured them.

According to one senior member, Lauren Salzman, at the start of NXIVM meetings, the women described as “slaves” offered a tribute to Raniere. During her testimony at Raniere’s trial, she reportedly said they stripped naked and sat on the floor in front of him, while he spoke to them about philosophy. If he couldn’t make a meeting, they took a group photo and sent it to him.

According to The New York Times, Raniere’s lawyers argued that people who claim they were coerced by NXIVM were actually making “adult choices.”

One member was kept isolated in a bedroom for two years. She claims that Raniere had sex with her and both of her sisters—and asked them all to get abortions.

“I knowingly and intentionally harboured Jane Doe 4, a woman whose identity is known to me, in a room in the home in the Northern District of New York,” Lauren Salzman told a judge, according to court transcripts obtained by The New York Post. The woman was reportedly kept in the home from March 2010 until April 2012 and Salzman threatened to deport her back to Mexico if “she did not complete labour requested by [her] and others,” the outlet reports. On April 2, 2019, she pleaded guilty to one count of racketeering conspiracy. The woman, identified only as “Daniela,” testified in the trial against Raniere that he groomed her while she was still underage, and they had sex shortly after her 18th birthday.

Daniela claims Raniere also had sex with both of her sisters, according to CNN. All three sisters reportedly got pregnant at separate times, and had abortions at the suggestion of Raniere. When Daniela told Raniere that she was interested in another man, he “assigned” Salzman to help her “learn from her mistakes,” in solitary confinement, Salzman testified, according to The Daily Beast.

“Of all the things that I did in this case and all the crimes that I admitted to, this was the worst thing I did,” she reportedly said. “What can I say? I kept her in a room for two years and I didn’t go visit her. And when I did, I wasn’t even kind.”

NXIVM leaders kept tabs on members by monitoring their usernames and passwords.

Nancy Salzman was NXIVM’s co-founder and the first person in connection to the group to plead guilty. In court on March 13, she confessed to a single charge of racketeering conspiracy. She admitted to hacking the emails of members suspected to be moles. The former psychiatric nurse was known as “Prefect” in the group.

She also confessed to “having others destroy video tapes” memorialising Raniere’s teachings.

“I want you to know I am pleading guilty because I am, in fact, guilty,” she said at court. “I accept that some of the things I did were not just wrong, but sometimes criminal.”

“I still believe that some of what we did was good,” she added. Her daughter is Lauren Salzman.

An heiress to the Seagram fortune harboured an undocumented immigrant for financial gain, and stole a dead woman’s financial information.

Seagram heiress Clare Bronfman, a loyal NXIVM follower since the early 2000s, used her wealth to bankroll the group’s activities and acted as its legal enforcer. In April 2019, she pleaded guilty to conspiring to conceal and harbour an undocumented immigrant for financial gain, and fraudulent use of identification, according to the U.S. Attorney’s Office.

Prosecutors said Bronfman recruited a woman from Mexico to work for a fitness NXIVM-affiliated company, submitting documents purporting to hire her as a management consultant with a salary of $3,600 per month in order to secure a work visa for her. In reality, Bronfman paid the woman $4,000 over the course of more than a year. In response to the woman’s request to be paid a living wage, prosecutors say Bronfman told the woman that she would have to “earn” her visa by doing additional uncompensated work.

Bronfman admitted to the crimes, and, per her plea agreement, forfeited $6 million. The plea meant she avoided having to go to trial with Raniere. “I am truly remorseful,” she reportedly said. “I endeavoured to do good in the world and help people. However, I have made mistakes.”

Prosecutors also say she used the credit card of a dead woman to keep money and assets out of Raniere’s name to evade paying income tax and his creditors or their judgments against him.

“Defendant Bronfman twisted our immigration system to serve a reprehensible agenda, and engaged in flagrant fraud to the detriment of her victims and in the service of a corrupt endeavour,” Seth D. DuCharme, Acting United States Attorney for the Eastern District of New York, said in a statement. “With today’s sentence, she has been held accountable for her crimes.”

My Life As A 31-Year-Old Sex Addict