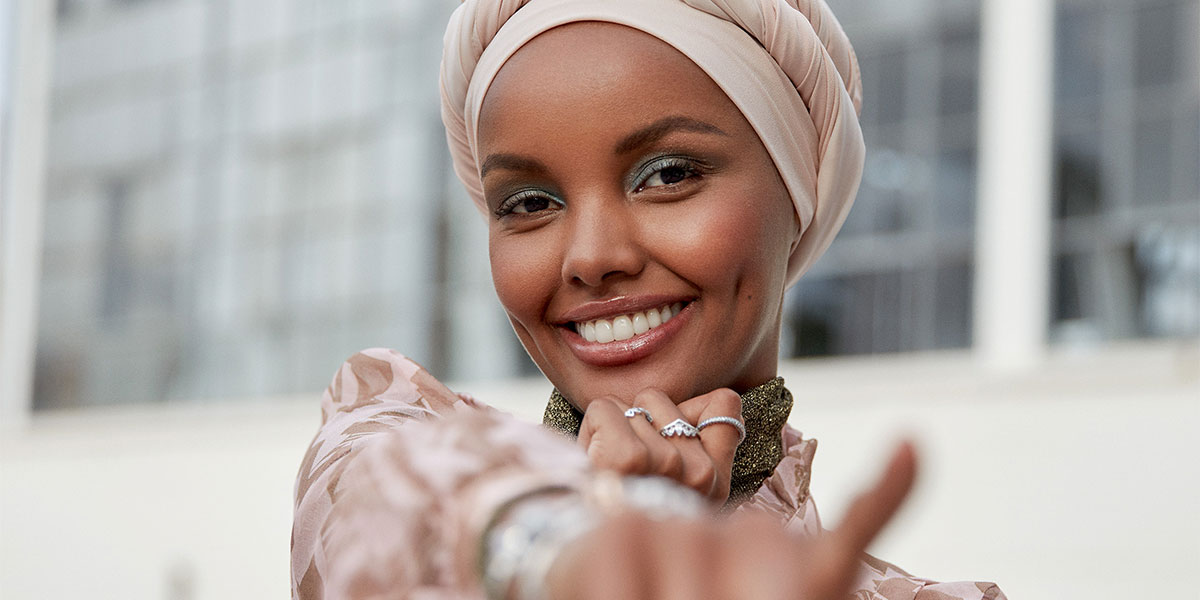 In 2017, a live video screening a 360 degree view of models wearing the Yeezy Season 5 collection probably had its audience wondering why they had to gather physically at Pier 59 in New York to witness a digital fashion presentation. Only after it cycled through all 29 looks did the models make their physical entrance, and as per the brand’s larger-than-life mastermind Kanye West’s track record, they were not all of the breed that fashion typically favours. There was Amina Blue, petite and just shy of 160cm; model-actor-It-boy Luka Sabbat; and the hijab-wearing Halima Aden, who very nearly didn’t make it into the line-up at all.

“They didn’t have the right attire. We got sent back to the hotel, and then I got a call at 10pm with my manager,” she says. “And they’re like, ‘Come back, come back. The stylist thinks she can make something work. We found a second look that you could wear that fits the modest dress requirements.’”

This callback proved to be pivotal for Aden and her career in multiple ways. It became her first runway, marking her rite of passage from pageant girl (she placed top 15 in 2017’s Miss Minnesota USA and signed with IMG after) to fashion girl, even if only by virtue of the show schedule, given that she also walked for Alberta Ferretti and Max Mara in a look that had been designed for her that same season. More significantly, it dawned on her that she didn’t have to change herself one bit to have a career in the industry. “I realised that fashion will meet you where you stand, and it’s okay to have differences,” says Aden.

Today, the 23-year-old model is a household name in fashion, and she’s known as much for her winning beauty as she is for giving hijab-clad Muslim women the representation they deserve in fashion — setting the bar of not having to compromise one’s identity and values to have a career in this space. Aden wears her hijab with pride at all times, dresses only in outfits that are modest, and changes in a private space while on the job. They’re her requirements for a booking, and brands like Moschino, Tommy Hilfiger and Pandora to name a few, have proven her right on her post-Yeezy epiphany.

It’s 3am here when I’m speaking to Aden over the phone. The middle of the afternoon for her in Minnesota, where she remains based after having been relocated from one of the largest refugee camps in Kenya at the age of seven. She sounds positively upbeat and cheery, her tone energising me more than the Americano I downed before the call.

She tells me about life before she got to America, how she’d lived in Kakuma with her family in a refugee community that was 66 per cent women and children. She’s Somali, and the people there hailed from all over the continent — Ethiopia, Sudan, South Sudan — driven there by famine, civil wars, unrest and persecution. “I remember seeing the UNHCR and UNICEF workers on the ground. I didn’t know exactly what those people did in terms of a job, but I knew I wanted to work with UNICEF or UNHCR and be that person, because they had so much impact on my childhood — seeing how my mum was just so relieved after every visit,” she says.

It’s one of the reasons why Aden recounts her time in Kakuma to be joyful, and why she’s come to combine fashion and activism today as a UNICEF ambassador, using her platform to advocate for children’s rights. “I’m so proud to say that during one of my very first meetings with IMG, we talked about wanting to work with UNICEF, and they set up an appointment.” She lets on that her mum doesn’t so much get the fashion stuff or care for it, but is delighted whenever Aden tells her about the work she does with UNICEF. “That’s our common ground,” she says. “I’m just so grateful that I’m at a place where we can combine both things I love so much.”

This purpose-driven spirit has also seen her grow to stand for more than just representation in fashion too; Aden takes on partnerships that have a wider social impact, such as fronting the sustainable accessories brand Bottletop and Pandora’s women empowerment campaign.

But don’t make the mistake of assuming that she simply lends her face or voice to them. She has toured Pandora’s crafting facility in Thailand and is educated on their sustainability and women empowerment efforts. She’s also been to the Philippines to visit Vita Coco — Aden is the global spokesperson for the coconut water brand’s social impact initiative — and the non-profit organisation Hope In A Bottle they work with, to learn about the social and community work they do on the ground. She says, “I think now, [for] the fashion industry, we’re not just talking about being inclusive in terms of covers and models. We’re also talking about [what’s going on] behind the scenes — corporate responsibility, [and] the communities in which they sourced from — that maybe the rest of the world doesn’t know about.”

If one had to sum Aden up in a word, a trailblazer — as cliché as it might sound — is only fitting, given that she’s left a string of firsts in her wake since the day of her homecoming in high school. She was the first hijab-wearing homecoming queen in the city of St. Cloud, Minnesota, and the first to take part in the aforementioned Miss Minnesota USA pageant subsequently. She was also the first hijab-wearing model to sign to IMG, and is now the first in fashion — from runways to campaigns and American magazine covers.

Being nominated homecoming queen gave her a boost, and having younger girls approach her for advice on various activities in school cultivated the mindset that she could become a representative for her community. “[That] I didn’t have to wait for somebody else to come and represent me. I could be that person for young girls,” she says. In high school, she joined clubs that were centred upon local community work and helping others, and went on to be a part of the Student Senate in college where she studied International Relations.

This community of St. Cloud is why Aden didn’t move to New York, Paris or another major fashion city after signing with IMG. Minnesota is home to the largest Somali diaspora in America, and Aden recounts how its people helped her and her family in multiple ways after they relocated there. They didn’t have a car for eight years, and in the harsh Minnesota winters, there was always a friendly face who would willingly give them a ride home. She says, “[I’m so grateful to] all the amazing people who worked hard to welcome us, to accommodate, to uplift.” Today, she lives in Saint Paul, and together with the meaningful brand partnerships she’s forged, counts being able to still call Minnesota home as one of the rewarding aspects of her achievements thus far.

When asked if she ever doubts herself now despite the commendable course she’s charted just under four years, Aden says, “I think one of my greatest insecurities is, have I made enough of my life? Have I done my part in society?” She feels incredibly privileged: “I really did win the billion-dollar lottery ticket to even get out of a place like Kakuma and come to America, and to now have this incredible career in fashion. So I just want to make sure that I’m doing my part each and every day.”

Guilt rears its head here too, for Aden is acutely aware that there are so many other kids who will not be able to leave the camp like she had the opportunity to. “How can I make it more about others instead of just myself, you know, being of service to others?” While the girls and women who finally recognise themselves in a M.A.C or Nike ad will tell her that she’s done her part, Aden isn’t resting on her laurels. But she does take pride that hijab-wearing Muslim women are now represented more in fashion, and not just by herself — there’s also fellow Somali Ikram Abdi Omar, and Shahira Yusof who’s British, black and Muslim.

In September, Aden interviewed Farida Osman, the Egyptian swimmer who’s clocking in a series of firsts of her own and smashing barriers in the sporting domain. She’s the first Arab woman to make the Olympics’ semi-finals, and the first Egyptian to take home a medal at the World Championships. “This is what I’m going towards,” Aden says. “That’s just one, but [it’s] to use my platform to spotlight somebody from my faith and community who is also achieving incredible things.” In Osman’s world of sports, Middle Eastern and Muslim women have long been underrepresented, for a spectrum of reasons that included cultural expectations in the past, with the recent decade seeing more women competing.

Aden shares that she has a fear of drowning, because she has never learnt how to swim. “Not a lot of women in the Muslim community think of swimming. We [didn’t have] modest swimsuits, or access to a pool growing up,” she shares. “I want to encourage other young women to take up swimming. It’s an important life skill.” She’s started to learn in recent months, and gleefully declares that she’s now able to stay afloat.

Having some time freed up during the pandemic has also given her the opportunity to go for acting classes. Aden ventured into film last year as the executive producer on I Am You, which shines a light on the refugee narrative. She took it on having personally identified with its story and it nudged her to explore acting herself. She says, “With or without the pandemic, the work must continue. I’m super excited.”