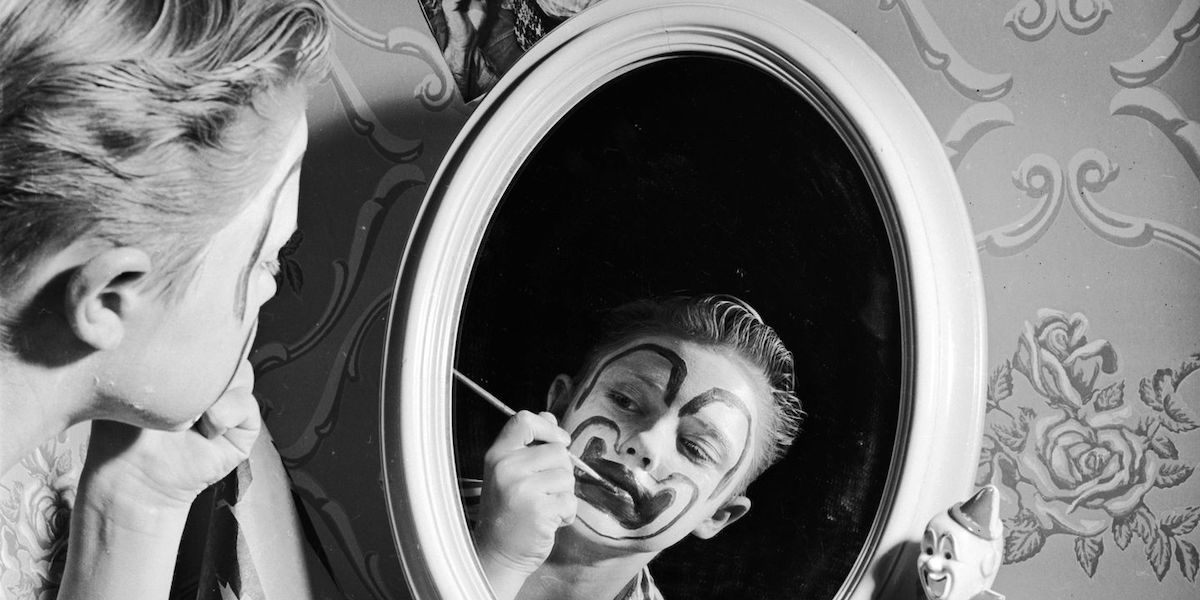 Has anything good ever come from white face paint and a red nose? Clowns have always occupied a particularly strange slice of pop culture. For decades, their role in our society has been debated: Are they joyful, terrifying, a meme, a vehicle for Joaquin Phoenix to win an Oscar? Some vouch for clowns as kids’ birthday party entertainers, while others will forever associate them with Pennywise, the demonic child killer who lives in a sewer. To say there’s a divide would be an understatement.

But it appears, as of 2020, we’ve firmly settled on “clown” as an insult. Its place in the pantheon of disses was solidified in September, when former Vice President Joe Biden referred to President Trump as a “clown” twice in the first presidential debate. Amid several interruptions from Trump, Biden said, “Well, it’s hard to get any word in with this clown.” He then corrected himself, adding, “Excuse me, this person.” At another point, while debating healthcare policy, Biden turned to the camera and asked, “Folks, do you have any idea what this clown’s doing? Do you?”

They were two moments fitting for a circus-like presidential debate. But they also had Biden walking quite a tightrope. Some praised him for branding Trump with an apt description, while others deemed the moniker below the belt. “I should have said this was a clownish undertaking instead of calling him a clown,” Biden later told NBC’s Lester Holt. But what caused this man in his seventies to pull out such a phrase? After all, clowns have existed for centuries and we never saw JFK call Nixon one. (Although, that would’ve been right on the red nose.)

Biden’s team likely fed this term to him, after it gained popularity with the Gen-Z crowd on Twitter and TikTok. But there was about a decade of work that led up to the insult being uttered on a national stage. Back in 2010, Urban Dictionary decided that the best way to describe a clown is: “Just a downright fool, someone who there’s no other word for other than ‘clown’ it explains how stupid they can be and how little you think about them.”

Three years later, a tweet from @skullmandible which cites “clown” as a particularly effective burn, went viral. He wrote, “most cutting thing you can say is ‘who’s this clown?’ because it implies they’re a) a clown & b) not even one of the better-known clowns.”

That same year, real-life professional clowns took offense to German Chancellor Angela Merkel calling two Italian political opponents “clowns.” Circus Roncalli Director Bernhard Paul told German news agency DPA, “Being a clown is an honourable, very difficult, sensitive, and artistic occupation.” Even people who make balloon animals for a living took one look at the political landscape and thought, “I would like to be excluded from this narrative.”

In recent years, clown shoes became the movie industry’s favourite accessory. It was one of the highest-grossing movies of 2017. Shia LaBeouf channeled his tortured rodeo clown father in 2019’s Honey Boy. Then the world lost its mind over Joaquin Phoenix’s Joker and what the movie meant (if anything) for society. None of these were exactly glowing depictions of the profession. Nevertheless, that same clown-obsessed culture found its way to the internet. According to Know Your Meme, the ‘Putting on Clown Makeup’ meme emerged—a way of depicting “a person making an increasingly larger fool of himself by providing arguments which are deemed increasingly weak or illogical.”

Clown as derogatory term was cemented on TikTok this year with the “Becoming A Clown Because People Keep Clowning Me” trend. In it, users tell revealing, often embarrassing anecdotes while applying face paint with lipstick. This usually involves triangles over the eyes, an overdrawn smile, and that signature rosy sniffer.

Soon, clowning could be used in several scenarios. For unsavoury dating behavior, someone might say, “This man has been clowning me the entire relationship.” To disclose one’s own shortcomings, they could ask, “Who’s the clown now?” And yes, the word is often hurled as a dig against those deemed incompetent or beneath them, as used by Biden.

2016 is also worth examining in this investigation. Weeks before Trump became our commander-in-chief, clowns had another resurgence. Social media users began claiming to have seen killer clowns lurking in fields and alleyways across America. Most of these “sightings,” turned out to be a hoax—but they hinted at our uneasy obsession with Bozo. It’s as if right around a monumental election people want to disassociate. Why work through inner anxieties about the world when we can flee from them via clown car?

On their own, clowns aren’t gruesome. People who wear polka dot parachute pants and carry red balloons read as pretty non-threatening. But have you ever seen something more devastating than a sad clown with tear-stained cheeks and downcast smile? It’s off-putting to have our expectations of merriment met with something a little too real. Any person who has been paying attention the last four years has become that sad clown, painting on a smile in hopes of a better tomorrow. So, Trump’s gregarious confidence about where we’re at reads as strangely as smeared white face paint.

By lodging our fears, our disillusion, our angst onto that figure, clowns become unsettling, the butt of the joke. In a year filled with trick mirrors, emotional juggling, and an unpredictable ringleader—is there any wonder we’re hung up? When we weaponise clowns, our own insecurities about looking like a fool fade away. But we still wait for the trick that will end the circus—be it an election, a vaccine, or a New Year’s Eve countdown. The universe may be watching us, thinking: send in the clowns.