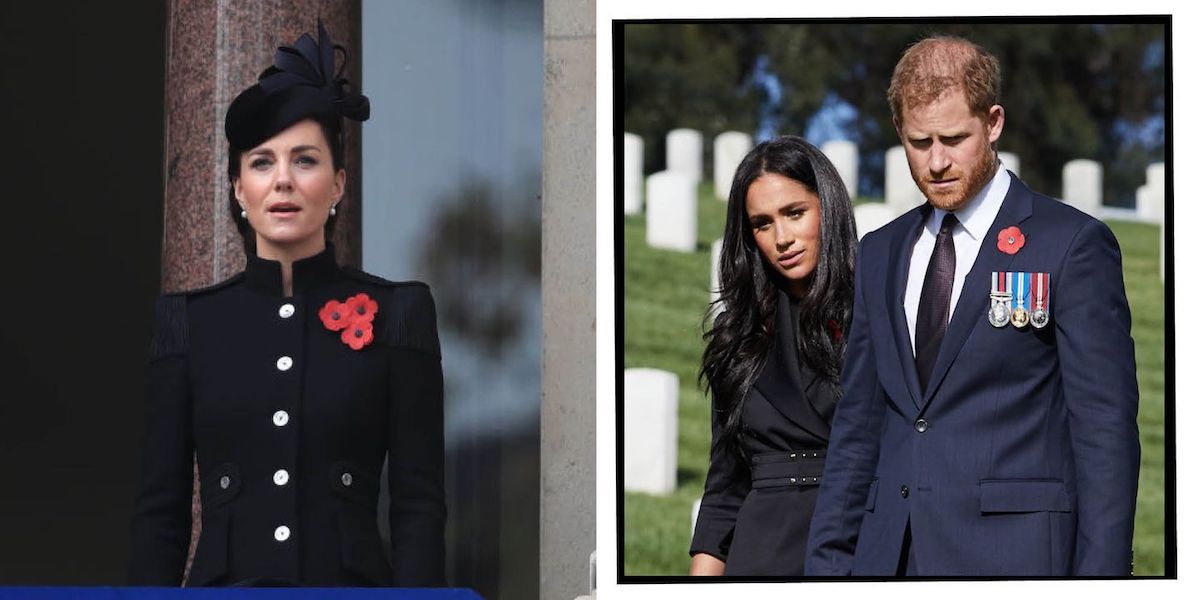 Kate Middleton and Prince William joined the Queen, Prince Charles and other members of the royal family for the annual Remembrance Sunday event at the Cenotaph in central London.

Meanwhile, as Meghan Markle and Prince Harry are currently based in California – and restricted from traveling except in limited circumstances due to the Coronavirus pandemic – the couple marked the day in their own way by visiting the Los Angeles National Cemetery.

According to reports, the couple laid wreaths and flowers (which were picked from their garden in Santa Barbara) at two graves of Commonwealth soldiers – an Australian and a Canadian.

The couple were photographed – Harry in a suit and Meghan in a long black coat, both wearing poppies – holding hands before putting face masks on when other people were in the vicinity.

This year marked the first time in recent years that Meghan and Harry had not taken part in the London royal commemorations, given their geographical differences to the rest of the royals.

Last year, the Cambridges and Sussexes joined the rest of the royal family, including the Queen, Prince Charles, the Duchess of Cornwall, current and previous prime ministers and politicians and thousands of members of the public at the Cenotaph in Whitehall to officially mark Remembrance Sunday.

Prince Charles, William and Harry stood by the cenotaph – as they laid wreaths at the foot of the memorial – while the Queen, Duchess of Cornwall, Kate Middleton and Meghan Markle watched from the balcony.

This year, the service looked a little different as the vast crowds were prohibited due to Covid-19 social distancing restrictions.

In 2018, William, Harry, Meghan and Kate attended a remembrance day service at Westminster Abbey to mark 100 years since the end of the First World War. The foursome – coined the ‘fab four’ ever since their first engagement at the Royal Foundation ahead of Harry and Meghan’s royal wedding – received a lot of adoration online during the appearance.

A year later in 2019, as well as the service at the Cenotaph, the foursome joined members of the royal family – including the Queen – for the Royal British Legion’s Festival of Remembrance concert at the Royal Albert Hall.

For the event, Kate – who, with William, was seated in the second row to the right of the Queen – wore a navy boatneck dress with an embellished headband to match.

Meghan wore a black Erdem dress for the occasion as she and Harry sat third row in the royal box behind prime minister Boris Johnson and his partner Carrie Symonds.

This year the festival still took place with Prince Charles and Camilla, the Duchess of Cornwall in attendance delivering pre-recorded messages.

Last week, the Queen was pictured wearing a mask and laying flowers at the grave of the unknown warrior in Westminster Abbey to mark 100 years since the unknown British serviceman was buried in the historic building.