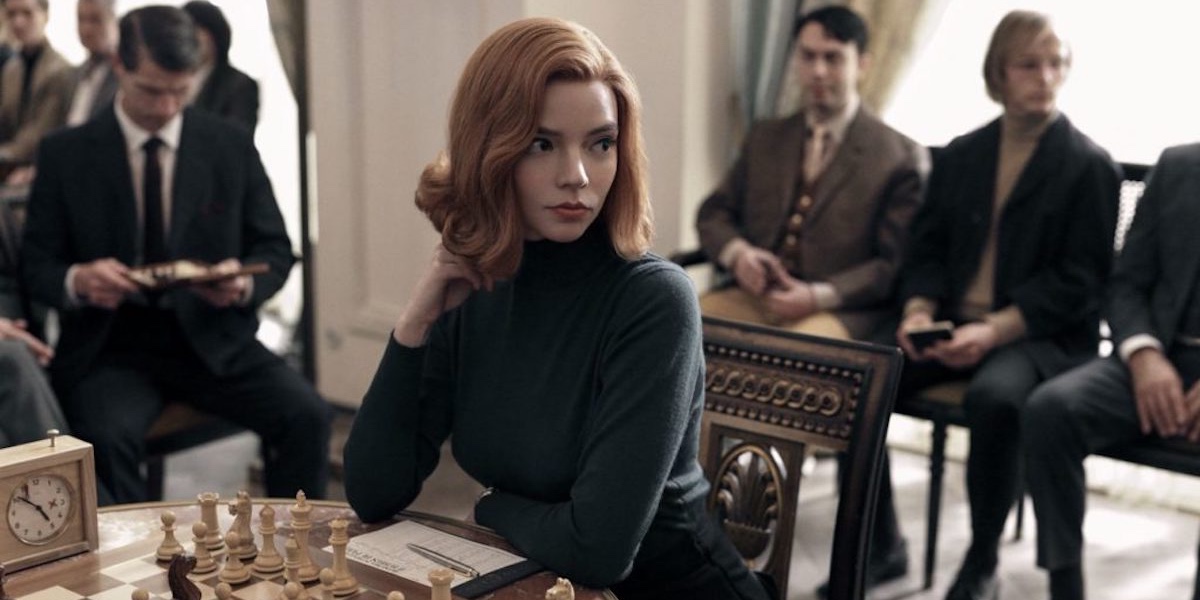 The Queen’s Gambit has cemented its place alongside Normal People and Tiger King as one of 2020’s must-watch series.

In October, Netflix dropped the drama, starring Anya Taylor-Joy, which details the story of an orphaned chess prodigy who battles drug and alcohol addiction to compete with elite chess players across the world.

The seven-episode-long drama is as nail-biting-inducing as it is fascinating, giving insight into the lesser-known world of chess, the lives of woman in the 1960s and, let’s not forget, the beautifully designed fashion.

Since it’s release, fans have been keen to find out more about the show, from its famous stars – Harry Potter and Love Actually actors feature – to the true-life story that may have inspired the narrative.

HERE’S EVERYTHING YOU NEED TO KNOW ABOUT THE SERIES:

Was Beth Harmon from The Queen’s Gambit a real person?

Unfortunately for fans frantically researching to find out more about the true story behind the show, Harmon (played by Taylor-Joy) was not a real person.

However, chess expert Dylan Loeb McClain suggests that the character’s story is reminiscent to that of famous male chess prodigy, Bobby Fischer.

Writing in the New York Times, the chess pro writes: ‘Fischer himself had been very dismissive of female players, saying in a 1963 interview that they were “terrible” and that a likely reason was that “they are not so smart.” Making Beth recall a female Fischer may have been a sneaky, and wonderful, way to send up that assessment.’

‘Beth wins the 1967 U.S. championship. That was the year Fischer won his eighth and final American title,’ he writes, adding: ‘After her adoptive mother dies in Mexico City, Beth, who is in her late teens, finds herself living alone. Soon after Fischer’s older sister, Joan, married and moved out, his mother, Regina, did, too, to pursue a medical degree. That left Fischer, at 16, living on his own.’

Both real-life Fischer and fictional Harmon learn Russian, have an affinity for top quality fashion and both play the same Fischer-Sozin Attack when playing white and facing the Sicilian Defense, Loeb McClain notes.

In addition, the games Harmon plays in the series are based on actual competitions, such as those that took place in Latvia and Paris.

How did The Queen’s Gambit go from novel to film?

The series is based on the 1983 novel of the same name by Walter Tevis but its journey to stardom has been anything but plain sailing.

According to an interview in 1983 with the New York Times, Tevis drew inspiration for his protagonist’s story from his own life. ‘I first began to play chess with my sister and the kids on my block,’ he told the publication.

When it came to addiction, he revealed: ‘When I was young, I was diagnosed as having a rheumatic heart and given heavy drug doses in a hospital.

‘Writing about her was purgative. There was some pain—I did a lot of dreaming while writing that part of the story. But artistically, I didn’t allow myself to be self-indulgent.’

Tevis, who died a year after the novel was published, describes his work as ‘a tribute to brainy women.

‘I like Beth for her bravery and intelligence. In the past, many women have had to hide their brains, but not today,’ he explained.

Bookreporter.com reports that in 1986, the organisation decided to serialise the novel, paying just $500 for the rights. ‘Our readers loved it – we got scores of e-mails from people who’d printed the chapters out and put them into binders so they could pass it on to friends. We sent some of these letters to publishers. But the book stayed out of print,’ it notes on its website.

Following Heath Ledger’s death in 2008, The Independent reported that prior to his passing, the actor was preparing to direct a film adaption of the novel. ‘The Australian actor was pencilled in to direct and star alongside the Oscar-nominated actress Ellen Page,’ it reported.

Speaking about Ledger and the film, screenwriter Allan Shiach – who writes under the name Allan Scott and acquired the rights to The Queen’s Gambit in 1992 – said: ‘Although I thought it was wonderful, the book was more about the central character Beth’s internal journey. That is hard to dramatise. The novel was more about chess than characters. I realised that if I were to take the project forward I would need to find the right balance between these two elements.

‘I wrote the draft of the screenplay myself. Then [The Coal Miner’s Daughter director] Michael Apted became involved. When he moved on to other projects, [Last Tango in Paris director] Bernardo Bertolucci wanted to do it. We worked on it for a year. But again things fell by the wayside.’

After receiving the backing of Ledger 16 years later, the pair sent the script to Page. ‘Heath was full of ideas for the other cast, mainly from his list of acting friends. We were planning to make a movie at the end of 2008.’

Shiach finally adapted the novel for Netflix and became a co-creator and executive producer of the 2020 series.

Which actors star in The Queen’s Gambit?

The show has a pretty stellar cast, with many British stars.

Taylor-Joy plays the lead character, following her roles in The Witch, Split, The Miniaturist and Emma. In the last year, the 24-year-old American-Argentine-British star also joined the cast of Peaky Blinders.

You’ll no doubt recognise Thomas Brodie-Sangster in the role of Benny Watts. The 30-year-old is best known for his part in Love Actually (yes, he’s ‘the kid’), in addition to playing characters in Game of Thrones, The Maze Runner and Nowhere Boy.

Harry Melling plays Harry Beltik, but you’ll probably know his face from his time as Harry Potter’s horrid cousin, Dudley Dursley. Following years of small parts and theatre productions, he’s returned to the screen in His Dark Materials, The Old Guard and is rumoured to star in the upcoming remake of William Shakespeare’s Macbeth alongside his Queen’s Gambit co-star Moses Ingram, who plays Jolene.

What are the reviews for The Queen’s Gambit?

Unsurprisingly, The Queen’s Gambit is receiving rave reviews from fans and critics alike.

Lucy Mangan gave the show four out of five stars for the Guardian, noting: ‘Unlike chess, The Queen’s Gambit is slightly less than the sum of its parts, but you will have a great deal of fun watching them at work.’

Chessbase.com adds: ‘The cinematography is no less breathtaking with many carefully composed images that wouldn’t look out of place in a gallery.’

Since the show’s release on October 23, there has also been a surge of interest in chess.

According to eBay, there was a 273 per cent increase in searches for ‘chess sets’ on the auction site in the 10 days following the show’s premiere on Netflix, equating to approximately one search every six seconds.

Who is behind The Queen’s Gambit’s fashion?

If the story of The Queen’s Gambit doesn’t grab you, its fashion certainly will.

Berlin-based costume designer Gabriele Binder is the mastermind behind the chess player’s looks and recently told Vogue that her research for the character involved delving into the chess world, the work of 1960s designers like André Courrèges, and stars like Jean Seberg and Edie Sedgwick.

‘I always try to mirror what is happening inside a character with what they are wearing on the outside and the checks are something that I thought would be immediately interesting to Anya’s character, as she would intuitively choose to wear pieces that are connected to chess,’ she told the publication.

‘The contrast of the check print also mirrors the nuances of the game itself — it’s decisive, it’s win or lose — which you would not have with, say, a floral print.’